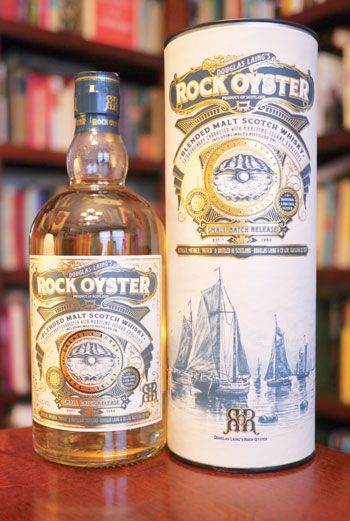 Tasting notes:
My middle school earth science teacher said that he used to be the drummer in Blue Oyster Cult. True story. This was in the early 1980s and I suppose he could have been the right age. But was he telling the truth? We didn’t believe him, but we couldn’t prove he was lying.

The more interesting question is, why lie about such a thing? Perhaps it’s because oysters are cool (and because cults are assuredly not). Want proof? Have a sip of this Douglas Laing expression. It noses up with more lemony delights than a 30 Rock marathon in syndication. Perhaps by jamming a lemon into the exhaust pipe of a Citroen and revving the engine you’d get some sense of the deeply citrusy and oily aspects in this glass. Oh, and there’s some peat gestures here. Gentle, like the shadows of sunflowers, at least on the nose. On the whole, then, I feel as though I’m swimming in an Olympic pool, by which I mean a pool on Mount Olympus overlooking the Acropolis. [Stephen: “Do we tell him that that’s a distance of more than 400 km?”  Bill:  “No.  No we do not.”]

The mouth has big sweet explosions like the new Firecracker Oreos. Consider a model ship built from fire-singed cork inside a hand-blown bottle, and then filled with flaxseed oil. Now we’re getting some of the smokiness I only surmised on the nose, but it’s still a nice balance of peat and non-peat. I believe we believe that it illustrates the law of the extruded middle, if you like your logic puns with a whisky twist.

Rating:
–On the scale of new wave songs about fictional creatures–
The Douglas Laing Rock Oyster is the The B-52’s “Rock Lobster”–Infectious hooks, endearing dada-esque antics, and filled with surprises (what is a “bikini whale”?  why are they baking potatoes on the beach?)—the whole makes for a memorable experience.

–Our thanks to Mark Tucker and Vision Wine & Spirits/Classic Imports for the sample!