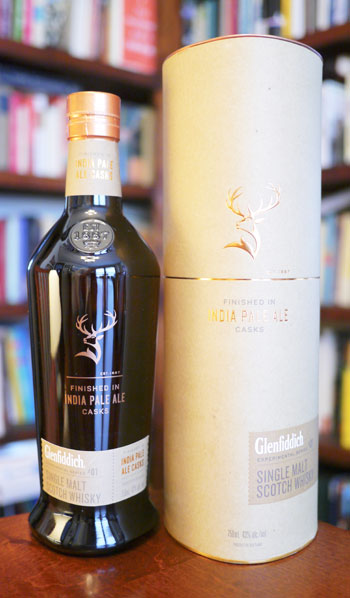 Tasting notes:
When I saw the sleeve of this bottle and realized it was an experimental whisky that married single malt and India pale ale, I was stoked.  You could say that on the stoke scale of 1-10, I was already into the teens (because really, if it’s being stoked that we’re talking about, it’s always going to be hors catégorie and off-piste).  I approached the nose with the fluttering anticipation and quickly flickering nostrils of a baby bunny.  What I found shocked me.  It was beery.  I mean, it smelled like the beer stage of whisky, except it was even more delicious.  I tell you, this had a better nose than that on the Roger Goodell clown shirt.  And yet I couldn’t drink it.  Surely this was the whisky equivalent of a yellow tree frog in the Amazon.  Beautiful but deadly.  My moralized sixth sense knew there was danger ahead.  [Bill: “Oh, really? Is that because pleasure was in the air?”]  Yes, pleasure was in the air, and it was fully ionized, Amazonian rainforest air, replete with lurking dangers.  I wanted to crawl inside my own nose and live within the universe of my sinuses in my nasal safe space.

Who am I kidding?  Poison dart frog toxins or no, I was going to drink this!  And I did.  My first impression was the lightness of the mouth.  Is this what poorly-cut fugu does? I asked as I reached down to feel my pulse.  But then it hit me: this whisky is sessionable.  Possessed of a candy-like thinness, it was something I could drink morning, noon, and night.  But if the body is thin, the reaction on the palate is big, like David Bowie’s body in comparison to his talent. Amid the booming reverberation, there are lots of high-register notes.  Think of a piccolo accordion player blasting out the best tunes you’ve ever heard through a Marshall stack that is the height of a monument.

The finish is unalloyed happiness, folded in joy, and placed into a box of delights.  It’s sweet and malty like a great Porter, the hops having been stitched into little velvet purses and strung on cotton twine.  I’ll hold the glass in my left hand as I walk into a milonga in Argentina and begin dancing a thousand tangos.

Rating:
On the scale of great Russian tango singers–
The Glenfiddich Experimental Release #01 Finished in IPA Casks is Pyotr Konstantinovich Leshchenko–You may be surprised to learn that there is such a person as the “The King of Russian Tango,” just as I was surprised to see Glenfiddich releasing experimental whisky.  But sometimes improbable pairings make transcendent unions.

–Our thanks to Glenfiddich and Alan Roth for the sample!