The motto for Westland Distillery in Seattle, Washington is “Thoughtfully Made.” We’ve always found their promotional materials, down to the hamster caskets they send the samples in, to fit this phrase. But as I took the tour of the distillery, I realized that rather than an apt description, “Thoughtfully Made” is actually a wild understatement.

You can see the thought put into the place soon after you walk through the door: boards that make up the walls are reclaimed wood, and exposed I-beams from the previous tenant’s days divide and adorn spaces in the bar and tasting room areas. Storage of a small number of barrels lines a meeting hall that Westland uses for hosting events. A display at the other end of that hall showcases the five different malts Westland uses in its typical mash bill: two malted barleys from Washington state (that make up 80% of the mashbill), two darker malts from the U.K., and an “Extra Special Malt” from Briess, Wisconsin. (Westland wasn’t looking for swing-state action when they picked that Extra Special Malt, but they got it–along with a side helping of Brexit for good measure. They’re fortunate that Washington is a reliably blue state, else they might find themselves more involved in politics than they’d like.)

Every detail of this rather complex mashbill has been thought out carefully, but the drying levels and the sourcing of each of these malts are primary considerations, as these contribute both to a specific flavor profile and to further Westland’s commitment to featuring local ingredients. But the Washington state sourcing is about more than just local terroir: Westland is working with academics (at WSU’s Bread Lab) and local farmers to produce grain and malt outside of the normal commodity markets, and contracting directly to have special and rare varietals grown just for Westland’s purposes. Westland has already laid down spirit distilled from several varietals no one has ever used for whiskey before (on the far right in the picture below is one such varietal–Purple Obsidian from Washington state).

However, for Westland, the focus on local goes beyond claims of terroir and thwarting systems of commodification, it’s simultaneously about unique flavors, like those found in the peat from Washington state peat bogs they have their maltsters use to produce their peated malt. Labrador tea is a singular note of this particular type of peat (and one that’s wholly distinct from Lipton that your Yellow Lab tasted before you managed to get to it).

But if that’s not thoughtful enough for you, Westland’s fermentation process reveals perhaps an even greater level of premeditation, because, after all, they could have come to the grain-forward approach after setting up the distillery. But not so of the fermentation process: they use a Belgian saison brewer’s yeast and a five-day ferment–in fermenters outfitted with glycol cooling jackets–to achieve citrus and other fruity flavors in the wash. While most distillers let the yeast go at it until all the furious reproducing raises the temperature in the tanks to the point of killing off the yeast, Westland knew before they ordered their fermentation tanks what type of beer they wanted to distill and spent the extra money to keep the yeast making slow, sweet love for an extended period of time. With all of that attention to detail, it’s remarkable that they didn’t have Barry White music playing in the fermentation room as well. 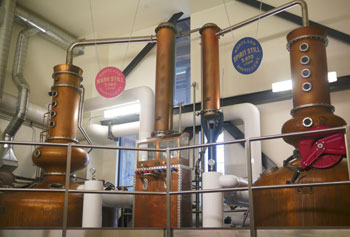 On the day I had my tour, I was extraordinarily fortunate to have Matt Hofmann, Westland’s Master Distiller, as my guide. As we moved into the still room from the fermentation room, the level of detail ratcheted up from slightly above whiskey fan tour group level to pure whiskey geek level. While I kept up pretty well and was thoroughly impressed with what I heard, I will not try to recount that information in that level of detail here, primarily because I couldn’t do it justice. In short, Westland set out from the start to produce a whiskey that would be excellent at 3 years old (without using smaller barrels or anything of that sort). To do that, the wash needed to be high quality and flavorful, but the distilling process needed to be precise and careful enough to capture only the best parts of the run, since they were not planning on leaving it in barrels long enough to take off any extremely rough edges. This much I’ve heard from craft distillers before, like KOVAL and FEW, but there were two kickers: the first was that Westland actually cuts the wash run (!!!) so that what

The lab at Westland Distillery

ends up in the spirit still is already devoid of the methane-heavy nastiness at the beginning of the heads. The second came when Matt revealed that they’ve laid down many barrels of a different kind of spirit–a less refined, more aggressive spirit derived from somewhat wider cuts (including no cuts on the wash run)–and they intend to mature it for much longer than their usual spirit goes. And as of this writing, they are still a ways away from trying any of it yet. Speaking to the first of many things I left the distillery looking forward to trying some day: I just hope that I can be back in Seattle around the time they dig into the first of those barrels.

And if you’re getting tired of attention to detail at this point, have a sip of something excellent from Westland and relax for a bit, because this is just how they roll. About 50% of the wood Westland uses for maturation is virgin oak, but it’s hardly your run-of-the-mill, keep-the-volcano-gods happy sort of virgin in this case. Westland uses only slow growth and extra slow growth virgin oak that has been air-dried for at least 18 months (I recall hearing something along the lines of “kiln-drying is for furniture”). And they air-dry the legendary Garryana wood for a full 3 years.  The idea, in short, is that air-drying induces more of the tannins to become acids that then catalyze O2 molecules into O atoms. Suffice it say that, as a result, this virgin oak creates more free Oxygen molecules to catalyze any number of positive reactions with the spirit. And the results speak for themselves. My goodness, do they ever speak for themselves. And highly. And they ain’t braggin’, either. 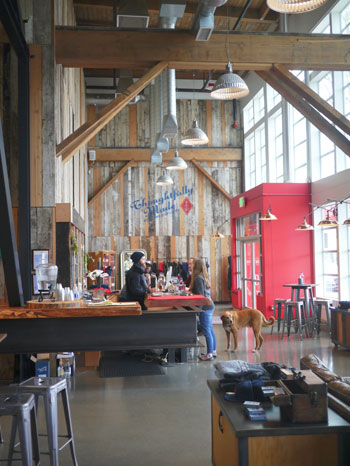 Overall, the work Matt Hofmann and his team are doing at Westland is among the most impressive I have seen in any distillery, be it whisky or whiskey. The care, the craft, and the forethought Westland puts into its whiskey is fairly astounding–until you try the spirit itself. We were lucky enough to try the liquid first, so, for me, the careful work of the distillery came as a “Well, of course!” kind of realization after the fact. If you are a whisk(e)y aficionado and you have doubts about the “craft whiskey” movement, find some of Westland’s work, and you’ll experience the proof right there in your glass. And, as is most often the case in our experience, great whisk(e)y comes into the world alongside generous, wonderful people who do the hard work of ushering it in–and who do the fantastic work of introducing others to it–and Matt Hofmann and his team at Westland live up to that tradition in the fullest sense. 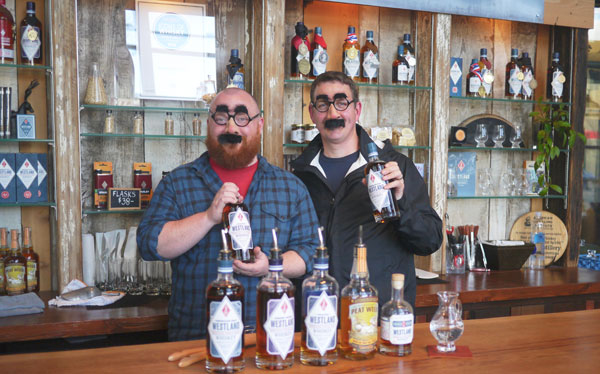