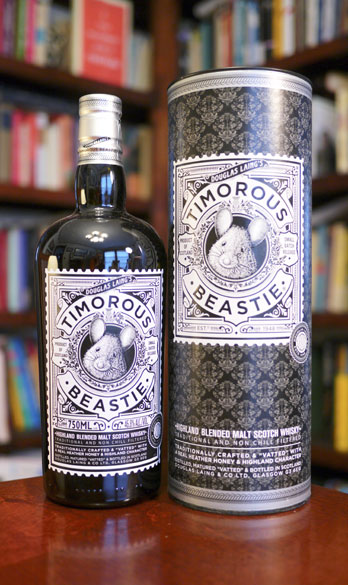 Tasting notes:
The Timorous Beastie could have opened with dimethyl sulfide, dimethyl disulfide, dimethyl sulfoxide, methanethiol, and dimethyl sulfone—you might recognize those as the chemicals broken down from asparagusic acid, a.k.a. wee timorous beastie wee wee. Instead, we got an eclectic feast: mulligatawny stew, grilled brined salmon on hash browns on a cedar shovel, newborn camel musk (right after the licking), and a lemur fart. For all that, it’s high and bright, with a sweet citrus swirl running through it like a meandering creek.

The mousefeel—did you see what I did there?—is very light and delicate; a pattering of rodent feet scampering across a scuffed red linoleum floor. That reminds me, did I ever tell you about the time I heard the skittering sound of a squirrel on macadam on a late autumn early Sunday morning? [Editor’s note: Here, we mercifully excised several hundred words irrelevant to the review.] It’s as smooth as rolling around in the sand on Turks and Caicos Island, as beautifully balanced as a Cirque du Soleil performer reading aloud stories written by George Saunders, and as zesty as aged clementines and grapefruits filtered through a lentil sieve.

The finish fires softly and sweetly onto the back palate, like wearing a deerskin straitjacket. There’s spice (anise, brine, thyme) cruising on high seas in a polyurethane skiff whose paddles are made of mouse earwax and dried heather. It’s diminuendo incarnate.


Rating:
On the scale of songs from La La Land—
The Timorous Beastie is Mia’s Audition (The Fools Who Dream)–Emma Stone rightly won Best Actress, and she’s beautiful, yet somehow not beautiful. When she croons her audition it’s compelling and not. Yet it’s lilting and ultimately haunting and unforgettable.

–Our thanks to Mark Tucker and Vision Wine & Spirits/Classic Imports for the sample!