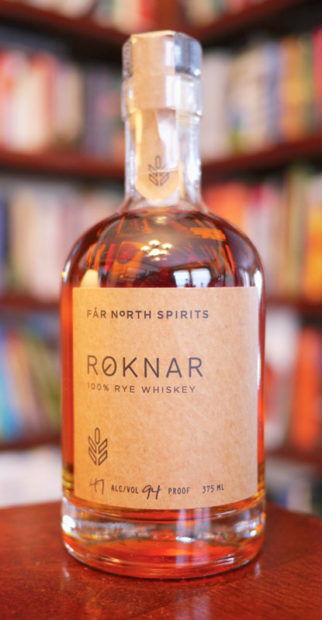 Tasting notes:
The Røknar 100% Rye, Batch 1, bottle 943 opens with the obvious question: How does bottle 943 differ from bottle 942 and, presuming 943 was not the last of the run, bottle 944? This question is washed away by the nose of comin’ thro the rye, fruitly. It’s muted and subtle like—and I know I’ve been to this well before—a Miles Davis trumpet solo, circa 1959. It feels like it’s smiling at me from inside my nose. (Is this a sign of schizophrenia, or has the curtain of pseudo-reality been pulled back?) [John: That would be rhinophrenia, and yes, it’s a sign that you have an advanced stage of it.] There’s moose cologne, for the rutting season and the fooling of hunters, and there’s an herby “look at that deer over there, not me” brown camouflage note. My epithelial cells are veritably being stripped and rewired as old-timey telephone operators plugged and replugged switchboards.

It’s malty, molassesy, and magical. Where’s that barley richness come from? Honey-buttered crusty bread, with caraway seeds, dandelion thistles, and avocado oil. A young counter-tenor singing in a room of baritones while dedicated minions swab listeners’ ears with caramel-dipped Q-tips. Pairs of tumbleweeds compete in a 40-yard dash, while ox-eyes and narcissus are rooting for them. (Ouch?)

If Nutella boasted of toasted, roasted hazelnuts, that’d be the first note of the finish. It hangs around the middle of the tongue, like a bad-boy flavor, flipping a Canadian loonie under a copper-post gas streetlight in a steam-punker’s fantasy. It’s lingering and undulating, like a Greek Bouzouki quartet that won’t leave your giro-piled table, even though you’ve already tipped them. Or maybe it’s the entertainer juggling Stroopwafels while somehow taking mid-air bites out of them as the Stroopwafels rotate and gyrate. At any rate, it’s a brilliant bit of craftsmanship that is fooling my medulla oblongata into believing that it’s a fancy liqueur being poured for me in a grand hotel in Mardi Gras—no mask required. (And yes, John, I know that the medulla oblongata actually controls autonomic cardio-pulmonary functions, okay? I choose to believe that it is a tiny agent with beliefs and a will of its own.)

On the scale of iconic sitcom houses in Minnesota–
The Røknar 100% Rye, Batch 1 is the Twin Cities house that Mary Richards lived in for The Mary Tyler Moore Show–You might rejoin that there is only one iconic sitcom house situated in Minnesota. I will rebut your point by noting that it dominates the mere prospect of other sticom houses in Minnesota the way the Mall of America dominates a Mom and Pop corner store. I’m already looking forward to Batch 2 (and John’s looking forward to Bottle 944)!

–Our thanks to Cheri Reese and Far North Spirits for the sample!