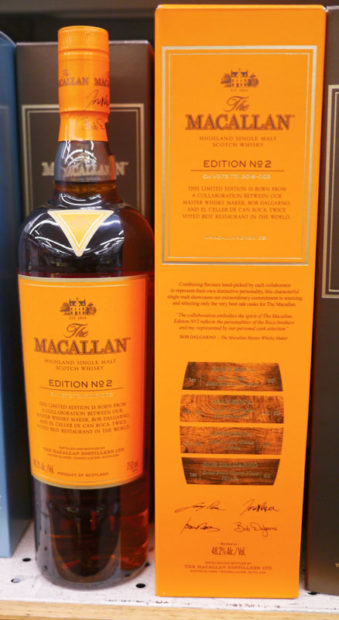 Tasting notes:
If a bystander could read my mind after nosing this dram, he or she would see fat, bubbly letters spelling out “round.”  In that same thought bubble, the letters are soon replaced by a bright red wiener dog formed of long balloons by a pudgy, but skilled child balloon sculptor.  Held in the dog’s mouth is a single plum, but it is a plum at the end of a long and distinguished career, and it’s thinking of grandkids and golf courses and gin and tonics.  Such is the nose, after all, on this distinguished sequel to Macallan’s Edition series.

The mouth is drier and more sophisticated than the Edition No. 1.  I want to say that it’s aged in a burgundy cask, at least in part, but this doesn’t appear to be so.  Instead I’m convinced that there’s a dark chocolate figurine wearing apricot leather vestments and hidden from view in a linen towel.  This figure stands in a dollop of onion jelly.  Which is to say, there is remarkable refinement and balance, like a Chinese puzzle that interlocks beautifully.

The finish here is more languorous, but when languor is precisely the disposition you’d want to be in.  It’s a good dog, the kind that doesn’t sit on the nice furniture or put its dirty forepaws on guests.  I say this on account of the way it flirts with the trachea, a coyness belied by the power the rumbles underneath.  Imagine if Melisandre gave birth to Casper the Friendly Ghost, who then proceeded to loiter amiably.  It is as happy as a cat on a window sill radiator when the robins first return to the yard.  I’m that happy, too, now that I think of it. 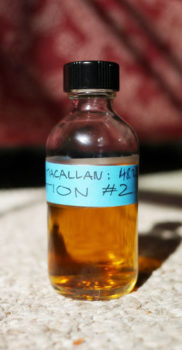 On the scale of would-be sequels that would improve upon the originals–
The Macallan Edition No. 2 would be 2 Citizen 2 Kane–Simultaneously a sequel to Citizen Kane and MC Hammer’s hit single “2 Legit 2 Quit,” we imagine Oscar-winning performances by Ice-T, Queen Latifah, Owen Wilson, and Bill Murray (as the voice of Rosebud).

–Our thanks to Sammy Karachi and the Macallan for the sample!