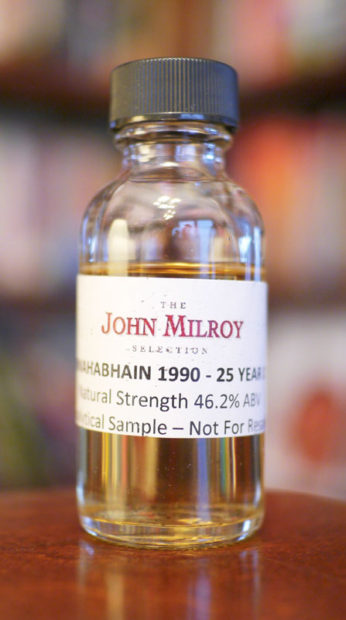 Tasting notes:
This dram recalls my days as a sous-chef in that Michelin-starred restaurant that shall remain nameless. Midday prep was a chore, but Clarissa, the head pastry chef, often made us her own take on Pop-Tarts®, complete with orange creamsicle filling, a lightly toasted almond crust, and a healthy drizzle of Devonshire cream. And the coffee Angie was usually drinking in the next station over always gave off a faint hint of cinnamon that added to the redolence. Or at least I thought it was cinnamon in her coffee: I discovered that she was in the midst of a project for which she was sucking some untold number of Red Hots candies into perfect spheres. I never asked her what the final product was supposed to be, but upon learning of this project, I immediately set out to ask Angie on a date. The nose here is heady stuff–just like that setting and that discovery.

One day Clarissa made homemade donuts in the place of her usual Pop-Tarts. That day comes to mind when tasting this dram, largely because the mouth here has a hole in it. Nonetheless, the donuts that day were freshly glazed and dusted with tiny sweets that effervesced throughout your mouth: think more sugary version of Champagne bubbles and less Pop Rocks®. Angie stuffed a whole one in her mouth, then declared, “There’s a hole in this!”–and she didn’t even have a pierced tongue. I wanted to date her more than ever at that moment.

The finish is like another day, the day Angie got into the coat check room during service and found an outrageous ermine stole adorned with strings of precious stones (our clientele was not above such ostentation). She drew close to the stole, then engulfed the jewels. She let them roll around in her mouth for a good minute or two, while I sweated it out as the lookout. The finish on this dram parallels Angie’s “fondling” of the decorations on that stole–in concept if not in execution. There’s even the faint, but now incredibly attractive, whiff of coffee hovering over the whole thing. That clandestine moment I shared with Angie was like this dram: utterly spectacular. And here lies the strangest paradox of all: the power and glory I consumed in this dram is as lasting and delicious as the feelings I had for Angie that, alas, went unconsummated (she was hit by a bus)–and were perhaps all the more powerful and glorious as a result.

On the scale of funny instances of being hit by a bus–
The John Milroy Bunnahabhain 25 Year 1990 is Regina’s getting what was coming to her in Mean Girls–This one has it all: humor, the sweetness of karmic payback, Rachel McAdams, and a young, vibrant, and still talented Lindsay Lohan. Glorious indeed.