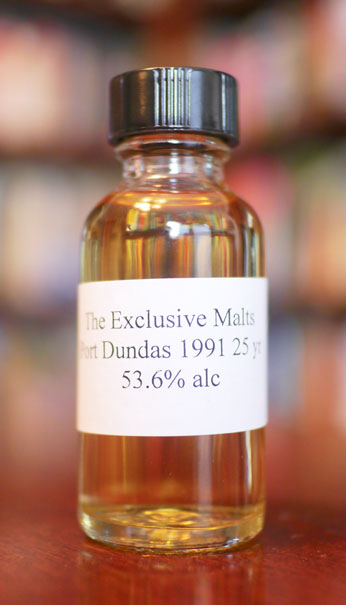 Tasting notes:
On the nose, this one presents with witch hazel used to whet a bit of celery-top pine bark woven into netting for catching hedgehogs (fools them every time!). There’s round sweetness from the grain, but roundness that’s been lathered with anise soap, and sweetness deftly extracted from a lavender and bamboo macramé purse by a young mother as yet unafraid that her boy could someday turn out to have Bill’s sweet tooth.

The mouth is bright like flavored vodka, only one flavored with hot, bright diamond dust in an attempt to upstage Goldschläger. Someone put forward this disturbing note, and I’ll offer it without comment or attribution: it’s like sleeping in an oak cradle made for a creepy baby diaper fetishist. OK, I will say this: the wood here is very clean and buffed to a high shine. Alright, maybe that didn’t help after all.

This dram finishes with cosmic radiation, like you’d imagine trumpeting out of Ganesha’s trunk, leaving a light film of wisdom on your tongue. It’s like the butler is ringing a silver bell that dinner is ready, and hearing it feels like home. It finishes with a hint of something herbaceous chasing the sweetness, like inadvertently eating the last piece of tiramisu from a skillet that had been used to sautée anise seeds and garlic ramps. Despite how that might sound at first, the finish is gorgeous. It’s like discovering that fresh thyme inserted into a freshly poured IPA just works, or that an amazingly aromatic curry sauce could accompany a flan. It’s a category buster.


Rating:
–On the scale of  category-defying structures–
The Port Dundas 25 Year 1991 from The Exclusive Malts is the Hagia Sophia–It’s been a Greek Orthodox basilica and an imperial mosque, but it was Atatürk’s idea to turn it into a museum that helped pave the way for modern, secular Turkey. Perhaps that will be lost, too, like Port Dundas was lost, but in the meantime, it’s a remarkable thing.


–Our thanks to The Exclusive Malts and ImpEx for the sample!