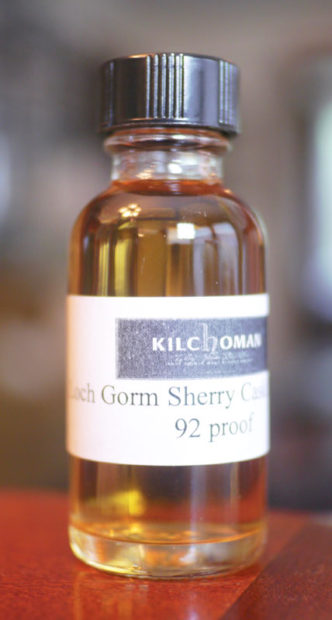 Tasting notes:
Emily knew better than to accept the elk biltong from the hitchhiker yesterday, but she has a habit of not wanting to offend others.  More than a habit, really, as she has chosen to see this as one of her strengths.  However, it was finishing the celebratory sherry with her dive school classmates last night that really had her feeling regret.  In the brightness of the sweltering morning, and with her dive mask straps digging into her throbbing temples, she began to meditate on her penchant for making mistakes.  What she didn’t know was that her next mistake was building up inside, as it were, while she brooded over the others.  Later she would blame the punishing surf the boat met with as it slipped out into open waters, for this jostled the huddled divers who looked for all the world like steam punk Emperor penguins escaping to a Mediterranean redoubt.  Yes, the boat was partly to blame.  Still, it was her decision to take a deep sniff inside her wet suit as she tugged her zipper the last several inches up nearly to her chin that would give her new reasons for doubt and self-loathing.

Such is the nose of the Kilchoman Loch Gorm 2016.  Notes that pitch violently between the aquatic and the necrotic are, initially, so stunning that one struggles to find the right words for them.  But then something remarkable happens.  Once the funk blows off, there is the smell hovering around the prize-winning DeWALT belt-sanding artwork: a combination of engine oil, smoking rubber belts, and splendid wood.  It’s like a vaguely caramelly candle lit in a middle school life sciences laboratory.

The mouth continues this unusual journey.  It’s so smoky and large that I can’t help but think of Smokey the Bear.  What’s more, the sherry that was, moments ago, so formidable, is now sublimated into something else entirely.  I’ve got Marty McFly’s space-age sneakers skidding on the pavement after coming through a time warp.

The finish is more or else an echo of the mouth.  It’s like the almost kinetic thrum of an orchestra stopping the piece so suddenly the audience sits in an momentary, but excruciating silence.  Some sourness emerges, as if it were too shy to do so on the mouth.  But in other ways it is adventurous, like the time I snuck into the British museum with some public school lads on a lark.   We were pretending to share cigarettes with a mummy that we had just unwrapped.   Ronnie, the funny one, spoke for our old friend.  “Eram quod es, eris quod sum,” and everyone laughed but Warren, who insisted that no Egyptian could have spoken thus.

Rating:
–On the scale of Victorian pastimes–
The Kilchoman Loch Gorm Sherry Cask Matured 2016 Edition is “unwrapping mummies”— It begins with the anticipation of the mysterious and moves quickly toward the startling before settling eventually into the comforting realization of shared humanity.


–Our thanks to Kilchoman and ImpEx for the sample!