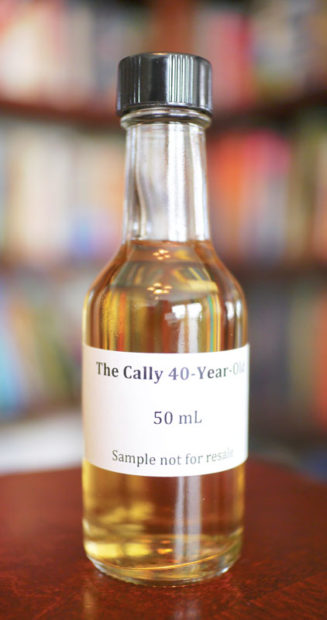 Tasting notes:
The Caledonian Grain Distillery closed in 1988. If the nose on this dram is any indication, the kiln room must have also dried flowers to be placed in a high school yearbook. The still room floor must have also been the place that the first Macintosh mother board came off the assembly line, The mash tun must have doubled as a strawberry saltwater taffy puller. Hell, the manager’s office must have had my grandfather’s silk tuxedo (shawl collar and all) hanging on the back of the door, and the ladies loo must have had Tina Louise’s comb balanced on the edge of the sink. And someone, or something, at some point eons beforehand, must have called to the outer reaches of space by harnessing the wild end of a couple of gravitational waves, because the spectral portrait of that scene is indelibly stamped upon the nose of this spirit.

The mouth makes me think that the wash backs once stored oranges alongside tobacco. And that the grain bins were fashioned from rich mahogany that had once made up the walls of a rail car transporting four filthy but brilliant macaques, replete with leather collars for the monkeys and enough mangoes and papayas to feed them for months, to the fourth Viscount of Burundi. In other words, they were grain bins the likes of which no earthly grain had ever seen before. And in an earlier life, the low wines charger had served as a trunk on an Indian trader vessel bound for Gibraltar that had run out of oil and had burned anything with actual viscosity, leaving behind a nearly palpable residue of spicy richness that substitutes well for body.

The finish is simply stupendous. It makes me think the spirit safe also held all of the wedding bands of those who had known true love. And that spirit safe, like Van Gogh during his happy period: bright yellow slathered on thickly–or is that the brass shining so brightly, I cannot tell the difference? Really, who the hell cares? I might just faint into the feints.

On the scale of great parts of a distillery–
The Cally 40 Year Old 2015 Limited Edition is the pagoda–Not often used the same way as they used to be, these iconic architectural features are beauty incarnate for those travelers who know what they are.