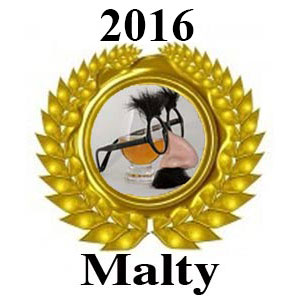 We failed to award The Malty in 2015 because, believe it or not, in 2015 we did not found another set of marketing materials that could get within two postal codes of our 2014 winner, Diageo’s Piehole Whiskey. In fact, no one has yet come close. While we’re very surprised (and a bit dismayed) to see that Piehole still exists, we have recovered completely from that 2014 ridiculousness and returned to looking for more typically inoffensive and entertaining candidates for The Malty. And earlier this year, we found our winner. So now we’re back to award this dubiously venerable, and utterly contrived prize. Out of deference to those with heart conditions, we will not maintain the suspense any longer and proudly announce…

The 2016 Malty for Best Unintentionally Parodic Marketing Materials for a Whisky Product goes to:


We should note at the outset that we loved the Highland Park Ice, despite the fact that the bottle had the color of a pool in need of a chlorine shock. For the sake of the 2016 Malty, the marketing materials we have in mind really center on the booklet. Actually, in large part, the booklet is great–it’s really just the tasting notes included in it. Here’s the book (and yes, I took the picture upside down and then rotated it, and now it looks weird–just deal with it): 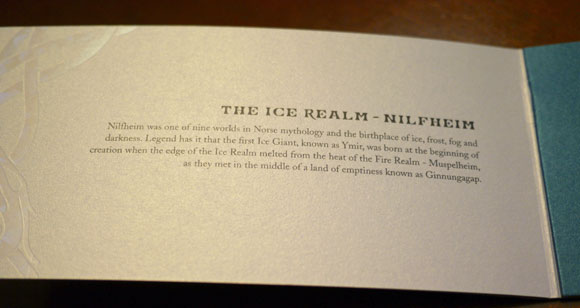 And there are some great embossed graphics here, too, none of which warrant any real ridicule, beyond noting that there are other Norse gods Highland Park never used in their previous series, so there was really no reason to devolve all the way to the elemental with “Ice” and “Fire”–unless they’re planning to do “Earth” and “Wind” next, in which case, it’s very cool.

Again, all good, even very well done. But as mentioned at the outset, the parodic part comes at the tasting notes included near the end:

This page was a bit iridescent–another nice feature–but that made it hard to photograph well. But we’ve transcribed it just in case you can’t make it out well or you’re reading this on your phone:

OK, so definiens shouldn’t be in the definiendum, but we’ll let that one slide. Mirror-like brightness is creative, at least, and sounds like something we might write if we were to taste a whisky in a spotlight store. Moving on…

Nose:  Intense aromas of cool, fresh pineapple and ripe mango sorbet come to life – in this celebration of glacial character. Silvery shards of smoke give way to the frosty kick of root ginger.

This is also not egregious, though “cool” and “sorbet” seem like they were added here by the head marketing guy after the fact, and then somebody thought “All frozen things are dead, but not these things: they’ve come to life!” Actually, that may be a bit harsh. But the dash right after “life” is inexplicable almost to the point of being unforgivable. Then we get the good stuff: some nice alliteration mixed with category-shifting paradox followed by animating terms describing rhizomes with its name inverted to sound artisanal. That’s our kinda stuff right there. But it’s the palate:

Palate:  Like the Ice Giants themselves, the palate is powerful yet mellifluous. In true Highland Park style, the combination of a silvery, misty peat smoke is intertwined with pearlescent vanilla seeds and overtones of molten orris root.

Now, “mellifluous” isn’t a word that really contrasts with “powerful” in a way that would justify the setup in this first sentence, but fine. But it goes downhill quickly from there. First of all, if you’re going to open up the thesaurus to find words like “mellifluous,” the least you can do is find a synonym for “silvery,” so you don’t end up using it in both the nose and the palate. Second, the only people who could dream of vanilla seeds as pearlescent are those individuals who have never encountered vanilla seeds in real life, since they resemble tiny animal droppings much more than they could ever compare favorably to pearls. Finally, this is what orris root looks like:

To consider it molten might even be a stretch for us, and on this score, let’s just say we are very limber. As we tend to say at this key point in awarding a Malty: c’mon fellas, rather than parodying yourselves, you should leave this kind of thing to the experts (us).

But again, not to be too harsh here, after the palate bit, the writer(s) came down off of the ceiling, squeegeed his (their) third eye clean and cranked out this remarkably normal, even somewhat slick, set of notes on the finish:

“Snowballs,” I see what you did there. Very well played. And using “feverish” the way you did there, you might just get an invite to join us in the Malt Cave.