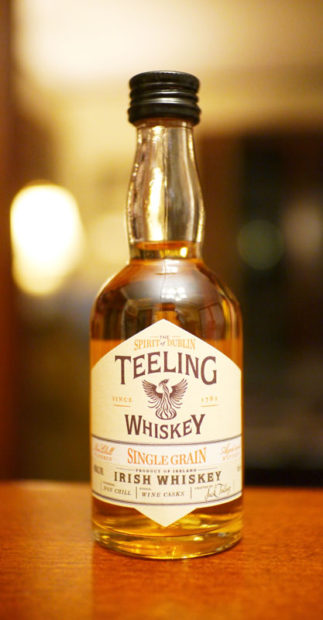 Tasting notes:
First, I’m reeling that Teeling—evidently a genius—was able to produce this much whiskey out of a single grain.

Second, I was unaware that a proud distiller in Ireland would stoop to rebranding a fine Alsatian cheese liqueur made by scowling grey-cowled monks: the sort of drink that induces palpitations and trembling in Vermont dairy farmers. There’s cider, too, on the nose—but lest you think it’s normal apple cider (Vermont again?), know that it’s pomegranate cider, producing a high, wispy cirrus cloud-like effect. Roast hazelnuts peek coyly from behind the robes of Fra “Barely There,” a possibly mythical brother of another order. Attenuated nasturtium stalks that were clipped a few days ago sitting in a rusty tin milk jug.

Creamy boscage and mallow herbaceousness intoxicate my tastebuds, which soon depart on a banker’s holiday. There’s a woodiness that doesn’t betray the alleged wine finish. Sauvignon blanc? I speculate. John is only too happy to take me down a notch: It’s Cabernet Sauvignon, he condescends, nudely, down the stairs to the Malt Cave.

Learn some Modernist history, you artless philistine! Where was I? Oh, yes, the wine is there, but its there-ness is there differently than a normal sherry finish. It’s the hazy remembrance of a discussion of the shadow cast by a transient satellite on a starless night.

Tannic must (the noun, not the verb) and drying finish allow the wine and cream to reassert themselves. At this point the wine makes a forceful rebuttal to my conceit in the above paragraph; it’s not finished with me! There’s a kind of resin, but more from a balsalm than a pine. It’s an aromatic—a bay leaf savory—and udderly devoid of turpentine, which was cowed by the Vermonter.

I grout my soul with it. I beatifically anoint John, then baptize him with the Teeling. His startled resentment is a delectable counterpoint to the balanced palette of flavors coating my palate.


Rating:
On the scale of brutal punches–
The Teeling Single Grain is the new MMA featherweight champion Conor McGregor setting a record by knocking out Jose Aldo 13 seconds into their title bout–Coincidentally, that’s about how long it took me to glorp my glass of the Teeling Single Grain! Perhaps it wasn’t a coincidence after all!

–Our thanks to Teeling Irish Whiskey for the sample!