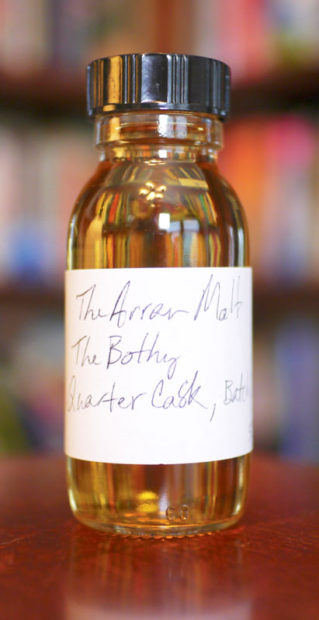 Tasting notes:
The nose opens with a great old winey smell that quickly evolves into notes of a swimming pool used for making large batches of crabapple cider, at the edges of which are random people bobbing for butterscotch. There are also hints of a meatloaf made from candy animals. All of which is to say that it’s remarkably rounded and harmonious, even exemplarily so. It’d be Euphonious, if sounds were smells, and if the jazz great T. Monk named his son what we think he should have named him.

As it hits the tongue, it’s all about grapefruit for a moment. Then the mouth explodes in slow motion into crystal myriagons and chiliagons of sugar. If it weren’t so apt to induce philosophical meditation, I’d say it was psychedelic, provoking images of Christmas lights being eaten by an albino python after he’d eaten a disco ball. [John: That should be “a python with albinism.”] There’s also a faint hint of sawdust–some wet, some dry–garnishing a plate of freshly cut sedges.

This picture was taken in a parked car for very good reasons, none of which had anything to do with drinking it in a car. Please don’t drink and drive.

The finish presents first with macadamia nut meat that a seven footer left to dry on a ceiling fan blade on a front porch. But alongside the creaminess, there’s also muted peppermint and orange oil. But this isn’t any orange oil: this is estrus orange oil trying to mate with my taste buds. It’s frottage without décolletage. Now it’s crawling up the sides of my cheeks. Damn, it’s downright effusive. And, not surprisingly, it takes a good while to calm down.


Rating:
On the scale of jazz greats–
The Arran The Bothy Quarter Cask Batch 1 is Milt Jackson–Two words that capture this dram better than any others I can think of: jazz vibraphone. Bright, lively, ebullient, and in no way harsh, it’ll make you want to stay up all night and earn the nickname “Bags,” too.

–Our thanks to Arran and ImpEx for the sample!