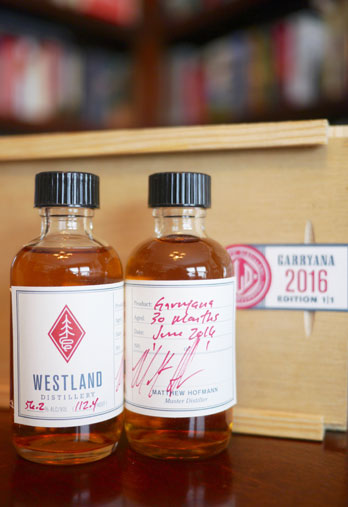 Tasting notes:
The nose on this whiskey is vibrant and wonderfully wild: it’s a smoldering crib that firefighters carry out of a burning home, only to find that the child had already been saved and it was a sack of plums under the blankets instead; it’s like licking a table leg while the adults, whom one sees only from the knees down, are eating venison; it’s a quilt made from strawberry-infused nut meat and singed carbon fibers spun by Garryanastiltskin; it’s a nude woman running through a campsite with tree limbs lashed to her body, screaming “I am Groot!”  All of this is to say that it’s a deep, complicated nose. Work on it for a while, and it smells like it could be a cocktail, and a weird one, from an intense, long-bearded, chronically depressed bartender whose only delight is befuddling his customers. His cocktail for you on this day: “Ted’s Frozen Head,” which captures, the bartender exclaims, the essence of his sweet swing.

If all of the preceding description offers more foreboding than joviality, that’s because good writing does such things, but also because I’m writing this after I’ve tasted the mouth. Aside from the fact that both are powerful, the mouth is nothing like the nose. The mouth offers cashews at the outset, then the power rises on the tongue as the lips tingle from their earlier brush with it. There are also notes of burnt bay leaf and poppy oil. Quite distinctly, you can also taste originality and authenticity. Not just one or the other, but both. Quite distinctly. As the mouth eases into the finish, it turns dark and alchemical, like a morphine drip giving hospice care to your soul.

Experiencing each of these parts and then stepping back to ponder this whiskey as a whole, it’s backbone is exquisitely clean: it is utterly without mank or green esters. It takes over your tongue and then your consciousness. Then it engenders a sort of pre-emptive moral outrage: “This is Edition 1 of 1?!? They damn well better make available some 3+ year old version of this next year…”


Rating:
On the scale of preserved noggins–
The Westland Garryana is Jeremy Bentham’s head–Admittedly, this makes the tone I’m going for here sound more macabre than I intend. I’m really going for more Grimm’s Fairy Tales than Bring Me the Head of Alfredo Garcia or even Futurama, because there’s some dark, awesome, powerful stuff going on in there.

–Our thanks to Westland for the sample!