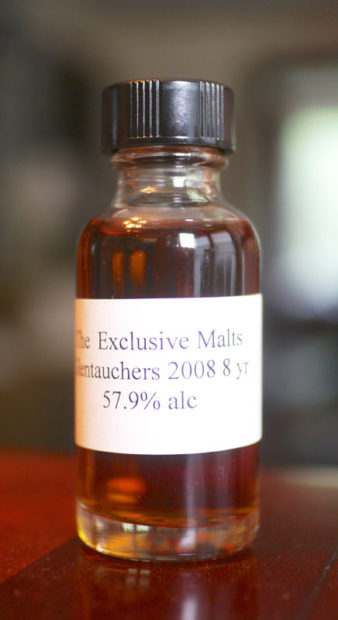 Tasting notes:
On the nose, there’s a weird note right off the top: the best way to describe it is that it seemed that the cask held the Guinness World Record for bung holes. Bung holes all the way around: bung holes everywhere, just everywhere. Oh, the cooperage! It evokes memories of young American craft whisky for a moment, and then it doesn’t: a nice caramelly note comes in after a little work.

On the mouth, there is an amazing note right off the top: the best way to describe it would be that it’s a Port from a tiny town in Italy used for Communion by a reclusive sect of Austrian monks. And no, they are not members of the Illuminati, though they have lobbied unsuccessfully for decades to be able to join. There’s also something sweet and fiery on the mouth, like an almond and blackthorn berry tart drizzled with a sloe gin syrup. The mouthfeel is that syrup: it’s just on the right side of cloying. That’s right, this whisky sloe jams the news.

The finish is neither weird nor amazing right off the top, but it is a bit waxy and does present with anise and notes of ginger scones. It also fills the cheeks like an ambitious hamster used to putting away burritos on YouTube. The satisfaction the finish provides, especially after the initial jolt of the nose and following the mouth, is redemptive and enlightening.

Rating:
On the scale of great dog breeds—
The Glentauchers 8 Year 2008 from The Exclusive Malts is the British Bulldog–With a tendency to drool and endowed with muzzles only their mothers–or an outside-the-box human–could love, they are affectionate and calm, they love people, and are even exceptionally well-suited to apartment living.