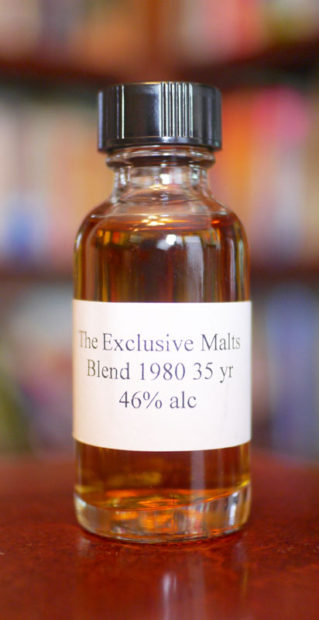 Tasting notes:
The nose of the Exclusive Malts Blend 1980 35 Year Old exuberantly announces that it is the most glorious dump dram ever! (Our site is nothing if not educational: A ‘dump dram’ is the collection of last little bits from glasses and bottles that all get dumped into a single container. Therefore, it is funny—please laugh along with us here—to call an expertly blended drink a dump dram. Get it? Get it? Hahahahaha!) Anyways, it’s a bouillabaisse of stone fruits, which is to say, a set of blenderized or cuisinarted drupes or indehiscent fruits, lightly toasted oats, and seventeen antique accordions collected by a New Orleans zydeco aficionado. I like the rich tonality of #8 best, personally. We also got a Hoover vacuum sucking notes out of a harmonica and a sustained chord played by a sextet of oboists. Finally, a tapestry made of molasses used in an invitation only avant-garde production of Hamlet in a loft in Noho.

The mouthfeel is thinner than I would’ve expected, but the richness and balance are perfect when one takes a big swig, or as I like to call it, a glorp. This is a dram to glorp; upon so doing, one finds a slender lattice of ironwood holding a burnt-butter ice cream  scoop on a maple syrup-dabbed waffle cone. There’s also a 52” leather belt (made from emu hide, of course) wrapped three times around the waist of your six year old nephew: He’s so happy to wear your overlarge clothes! We also found the effect (upon glorping) to be that of the Grinch lobbing a pineapple grenade at Whoville, but finding to his chagrin that instead of an explosion of hellfire and ruination, it sent showers of orange hard candy, confetti ribbons, and origami cranes folded by monks down onto a grateful, blissfully naive populace of Whos.

The finish is a quietly explosive rum-tum-tumming lemon zest and hay salad a-thrum thrum thrumming all around the palate. There’s a model aeroplane mistakenly built from Himalayan balsam shrubs (Impatiens glandulifera), rather than balsa wood. It careens crazily around the gullet as the rubber band dramatically uncoils. There’s also a slow burn from an award-winning pitmaster, spice gumdrops, and artisanal lollipops made in Queens from a rye Manhattan poured in the Bronx.

On the scale of animals possessed of incredible color perception–
The Exclusive Malts Blend 1980 35 Year Old is the Mantis Shrimp—They are little-known amazing creatures of the deep; their limbs move so fast they literally—literally—boil water around themselves and send shockwaves that can kill their prey. What’s that, John? Oh, yes, sorry. Instead of our two piddly color receptors, they have 16 different kinds! 16! Sixteen.