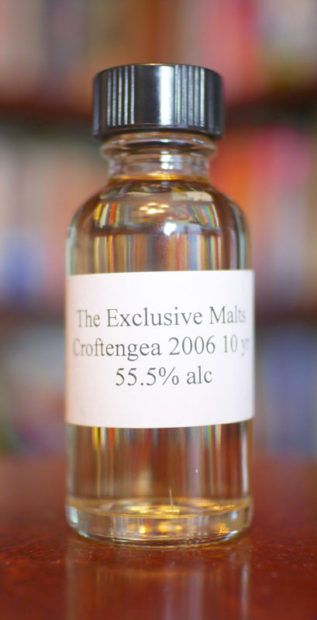 Tasting notes:
The Exclusive Malts Croftengea 2006 10 year brings in da sherry funk like a fútbol Univision announcer shouting “Sheeeeeerrrrrrrryyyyyy Fuuuunnn-nnnnnnnnkkkkkkkkkkkkk!!!” over and over. There’s also burnt whole wheat toast that’s been spread with marmite and peat. We also got pickled daikon radish and beets—but not turnips, okay? There was a dinosaur stomach (allosaurus) preserved in amber, and David Bowie on stage in the 1980s, but completely wrapped in burgundy silk so that you could see nothing of him but some semi-sinuous writhing. It’s piercing, yet blunt: ash lances after jousting.

The mouth brings a seesaw of funk’n’peat, swinging up and down, up and down in a spearmint playground. Neither flavor can claim victory; it’s as beautifully balanced as a tumbling Simone Biles. The spearmint, if it could, would chuckle to itself knowing that after all is done, it will be the last flavor standing: The Crofteninja Warrior.

The finish is drying, peaty, spearmint-inflected, and well-punctuated by a master copyeditor. The sherry’s been sucked out, as if a sherry sieve filtered it all, leaving behind the burn and the spice. Everything still balances beautifully, like orbiting black holes, one of which just sucked up a planet, but nothing large enough to emit a gravity wave detectable by LIGO.

On the scale of feelings evoked by software–
The Croftengea 10 Year 2006 from The Exclusive Malts is that amazing feeling you get at the end of the month when you reconcile your financial software and find that every single penny has been accounted for–Ta-da! All that money out from all those expenditures. The (never enough) money coming in from all sorts of income streams. It’s all perfectly balanced! Ta-da!