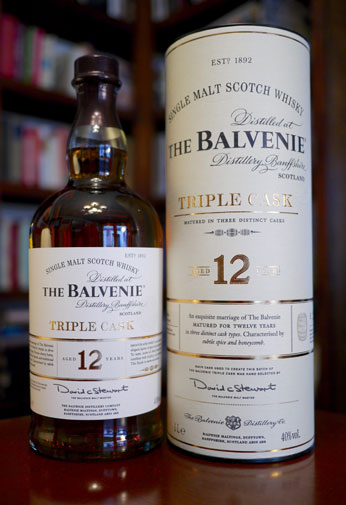 Tasting notes:
Three years ago, the Impostors visited Balvenie Distillery in Dufftown and had a wonderful time.  I remember it just like it was yesterday.  We received an incomparable tour given by Master Blender, David Stewart [Stephen: no, John, it was David Mair, Distillery Ambassador, but you’re right that the tour was fantastic].  We also went to their on-site cooperage and met a robotic cooper in beta testing mode, whom they affectionately called “Ian McDonald” [Stephen: no, John, Ian is person, not a robot, though there was robotic machinery on the factory floor].  Lastly, we got to walk close enough to the venerable Tun 1401 to see the ruby-red Batch no. 9 still on its honeymoon, and Bill began to calculate how difficult it would be to steal such a massive vessel [Stephen: actually, I’m embarrassed to say, John’s memory is exactly right on this point].

While there, we gave Mr. Stewart the idea of aging whisky in three different barrels, and he liked the idea so much he said that he’d call it “Triple Cask” in honor of the fact that every Malt Impostor review goes through a rigorous vetting from the three Impostors.  [Stephen: Dammit, John!  This is demonstrably false!  Do you remember nothing from our visit?]  To mark the three year anniversary of our brilliant idea [Stephen: *cough* bullshit! *cough*], we set out to taste a flight of Triple Cask Balvenies.  The Three Year Balversary, you can call it.  Or the Flight of that Balkyries, if you prefer.  In either case, here’s what we found. 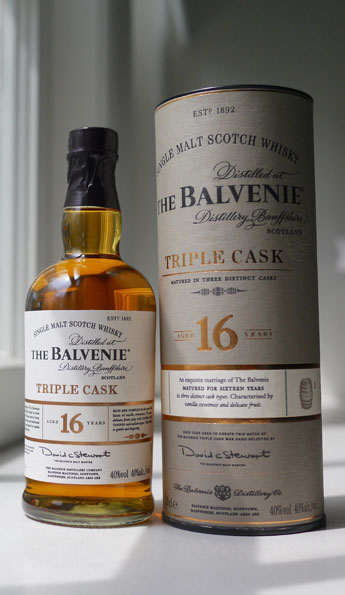 The Balvenie Triple Cask 12 year old noses up with notes from a foppish orangutan’s unguent satchel.  Sure, there’s also some spaghetti squash with sage lemon reduction, or a cribbage board made from butterscotch, but the tangy hominid unguents carry the day.  The Balvenie Triple Cask 16 turns it up a few notches, like moving to a full orchestra from a merely large wind ensemble.  Red sweet tarts made from Goji berries, but somehow there’s more herbaceousness than just fruit.  Think of how it goes when you add a bay leaf to a soup stock.  The end result is that the 16 carries on with more sweetness than the 12, and even some fuzziness, like it’s a Georgia peach next to a South Carolina nectarine.

It is no surprise, then, that the 12 year old has a perfectly delicious and syrupy mouth.  It makes a veritable pancake out of my tongue.  Herb notes come to the center just like in a Tijuana Brass Band.  If there’s an acerbic note as well, its rangy youthfulness is warmly received by all around it.  The 16 year old continues in this rich and coating tradition.  It’s the kind of house paint you only need one layer of.  At one point, Bill resorts to indicating his pleasure wordlessly, through semaphore.  Stephen offers that the 16 year old has so many notes, both over and under, that a Las Vegas bookie could sleep comfortably in the knowledge that on this night the house is guaranteed to make money.

The finish on the 12 is as welcoming as an afternoon nap in a hammock.  Some anise sticks its head up like a runaway child smelling fresh made cookies.  But it’s the neighbor’s kid and his parents know he’s hiding behind curtains held back by molasses vines.  The 16 finishes in an equally welcome way, but with a longer gate, taking determined strides into deliciousness.  Rich and thrumming, I am reminded of a 1000-cello concert that Kanye West might gift to his paramour.

Rating:
On the scale of things that are better because they triple, rather than single–
The Balvenie Triple Cask 12 & 16 are Jesus Christ [Bill: Um…]  Okay, I mean, they are the Ironman Triathlon [Stephen: I used to do triathlons].  Okay, wait, I mean the Balvenie Triple Cask is The Malt Impostor, the Drammie-Award winning whisky blog.