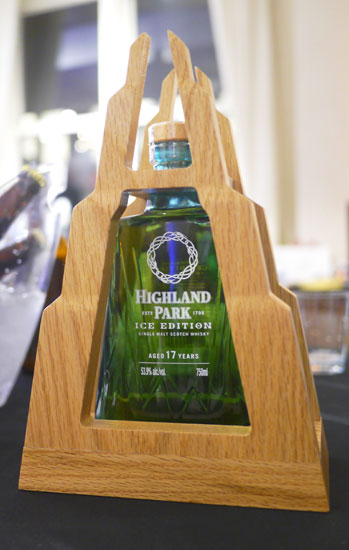 Tasting notes:
Naming this whisky after the solid version of water is interesting–even provocative–but it diverts attention from its distinctive characteristics. In short, this whisky, which is ostensibly the successor to the Valhalla series, needs to be named after a god.

On the nose, it may not be fully heavenly, but it is patrician. It’s balanced, with notes of newly cut zoysia grass, scratch-and-sniff wall decals for a child’s bedroom, Burgundy wine, and bright fruitiness. The nose is a rapier: it’s designed for thrusting (take that as you will), and it’s heavier and more substantial than even a saber. In other words, it’s not recommended for fencing.

The mouth, however, is heavenly delicate: it’s a smoothie for baby angels (no sippy cup needed, thank God). It improbably combines notes of peat, fruit, and nice sailboats. But the fruit is fresh fruit in a bowl for waxed fruit. And the mouthfeel oozes cherubic creamy goodness.

The finish is also heavenly, but only because the finish is the mouth is the finish is the mouth. It’s the Fouth of Minish, a peculiar territory where there is no way to discern the horizon (walk there, don’t sail). Once again, it’s balanced, but here you do get some gentle spice with assertiveness that derives purely from its confidence: it’s a pepper with a low Scoville rating but high ambition. But this is the ego-free confidence and ambition of an animist god. In a phrase: it’s so very Ice, Ice baby.

Rating:
On the scale of limited edition ice–
The Highland Park Ice is glaciers–There were over 130,000 worldwide as of 2003 (whereas Highland Park Ice was a mere 4 years old then, and now there are only 30,000 bottles worldwide). Thirteen years later, I’m afraid to ask how many are left, they’re going so fast. Buy some HP Ice and lower your carbon footprint, people!