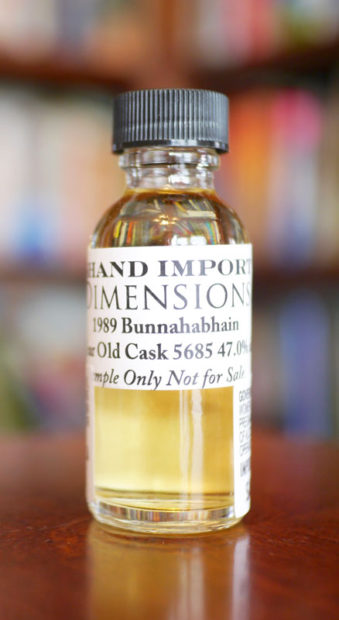 Tasting notes:
The Dimensions Bunnahabhain 24 Year 1989 opens with the Islay oils used to lubricate a tapered steel tip normally aimed at a neon board in a dark and dank pub, that is instead currently plunging deeply into a smoked plum–and remarkably, that plum is still on a plum tree. And even more remarkably, the plum tree is still blooming! There is a circle of Druids smoking the whole tree along with pickerel and desiccated aloe, which might explain these concatenating paradoxes. You guys got that, too, right? Guys? It’s diaphanous, like a…like a… [John: like an angel’s wing?][Stephen: like King Louis XIV-era princess’s silken undergarment?]

…like a newt’s cornea that’s been preserved in lime juice and apple cider.

The mouth is the climactic overlaying of resinous fireworks celebrating the Victory of the Pine Trees and the Cedars over the deciduous interlopers (it was a very slow battle). I’m drifting away in a swan boat with Lord and Lady Galadriel. I’m an elf prince! I am, by virtue of the liquid I’ve poured into mouth, perfected both morally and physically: I am become super duper über man! There’s no smoke and no fire and no peat, yet I’m warm all winter long; it’s the root vegetables. Parsnip soup, carrots in maple syrup, and rutabaga straitjackets keeping me in my jute-padded penthouse. It’s creamy and gelatinous and I’m painting stripes on my face and chest with it. If this is the dissolution of the ego that’s the end goal of a Zen koan, then hit me with your best Birkenstock.

The finish is brilliant, briny, buoyant, boisterous, bourbon-y, banana-y, and barely just a bit biting. There’s oak essence and vanilla esters mixed with Brazil nut meat and reduced to stock in a coconut on the half-shell. Pixels slowly form into a coherent picture, then fully resolve into a masterpiece. True story: I was writing this review during a lull at work, and a customer of sorts came in right after I took the “now it’s time to write about the finish” swig/megaglorp. I talked with her for some time, hoping she wouldn’t comment on my breath, but prepared to launch into a passionate defense of noontime drinking. All the while, that finish clanged and tolled in my mouth and throat like a medieval clock organizing reality for Dark Ages Benedictine monks.

Rating:
On the scale of everyday miracles–
The Dimensions Bunnahabhain 24 Year 1989 Cask 5685 is Inky the Octopus pulling a Finding Nemo by climbing out of his tank at the National Aquarium of New Zealand, scuttling and slithering across the floor to a narrow drain hole that must’ve brought the saltilicous smells of the ocean to which it led, for boldly and wisely, Inky squoze through the pipe to freedom; glorious, wild, orgiastic freedom.

–Our thanks to Shand Import for the sample!
(More details on this one at Master of Malt. Though they are currently sold out of it, we understand bottles are still available in the United States.)