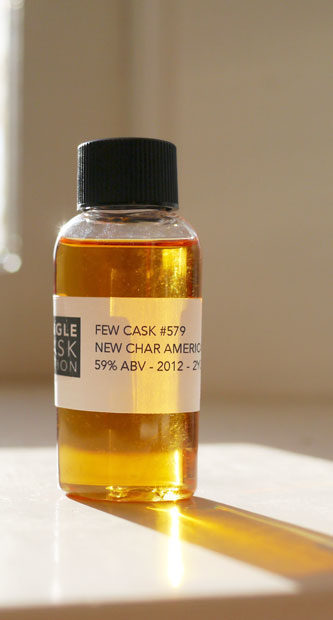 Tasting notes:
There’s bits of honeycomb held on the tips of a boar-bristle brush used to conduct an imaginary quartet.  My gestures are quite pronounced because the viola player is behind the tempo.  Again.  But maybe she’s right to slow things down, I think to myself, as the notes of cherry, pine cone, and tannery-aged green banana float across the gray, cold afternoon of my consciousness.  What follows is a mean oatmeal.  Not average, mind you, but angry and assertive.  I now move my arms to slow the violins.  Their high notes are pushing up into the bourbon registers.  When the tempo is settled, I find my head showered by wet herbs ground up in the impossibly large hands of Andre the Giant.

The mouth recalls nothing if not vanilla fondant coating a mortar round.  The cellist pushes this—briskly, brusquely, and even burlesquely—through until we reach layers of mahogany lacquer.  Can cellists be trusted, I wonder for the second time this week.  For I found before me blondies baked with a layer of cherry blossoms on top and pixie wings misted with musty chemicals.  And all of it with the thick viscosity of a simple syrup reduced on a campfire skillet.

The finish offers a bracing mule kick initially.  Or, rather, the elbow of the cellist in my kidney.  I wince.  But before I can say, “don’t tase me bro!” the spice settles down and the quartet, I realize, does not need my help.  It has settled into its own rhythm.  I want to comment on the spice that’s spicy but not too spicy and I think I’ve got it.   We have before us the genial, good-hearted humor of Steve Martin in the Smothers Brothers era.   Oh, sure, there’s stupid puns and slapstick, but also a uniqueness that is as hard to pin down as America itself.
Rating:

On the scale of guys who wear white suits–
The Single Cask Nation FEW 2 Year Old 2012 Rye (New Char Cask # 579) 2012 is Steve Martin–John Travolta can’t fit into his any longer; and Tom Wolfe is a good writer, but as a person, he seems worthy of being pummeled with a turnip. Steve Martin, though, has great range as an actor, plays a mean banjo, and even writes novels. As David Letterman was prone to say, the man’s a national treasure.


–Our thanks to Single Cask Nation for the sample!