Tasting notes:
Let’s begin with a paradox from a pair o’ docs. This whisky hasn’t been working—it’s been sitting undisturbed—yet now it’s ready to retire! 65 years old! If only millions of whiskies were turning 65 every day, taxing social security networks to their utmost: What would politicians make of it? Working, Sitting, Working, Resting, Retiring—perhaps these aren’t paradoxes as much as failures of language, and language is failng me as I try to encompass the essence of a whisky that is this old. Moreover, it’s 59.3% abv! No angel managed to make its way into this cask.

Uncapping the Wealth Solutions Gordon and MacPhail Glen Grant 1950 gave us all a Woody—no, it’s not what you’re thinking! It wasn’t Woody from Toy Story, nor was it Woody Allen or Woody Hayes: It was Woody Woodpecker; the cartoon bird with an unmistakable laugh and a near lunatic delight in the stuff of life. This, however, is more the Staff of Life than the stuff of life; before it opened it, it evoked the ancient world like an invocation opening an ancient Aladdin’s Man Cave of Wonder girded with beams from Greek triremes and Roman biremes from the Classis Misenensis. The idea of Afterwood, like ‘Aftermath’ or ‘Afterlife’ or ‘Afterparty’ or ‘Afterburners,’ took on a dictionary definable meaning: Those first moments of clarity and near religious vision when the wood aromas roll back and the water of life is available for inspection and exultation. Afterwood came neutron starfruit; a collapsed fruit that took us to the Platonic forms of fruit. Next came the grain-hold in Nefertiti’s tomb, the lampshade that illuminated Nero’s orgies, and lemon-infused kiwi nectar infused with three drops of honey carefully dripped in. The nose was glorious for a long time; long enough to also discern the ever-so-faint smoke of Robin Hood’s yew bow and Little John’s blackthorn staff burning at their respective funeral pyres.

Eventually we dared to drink it—and honestly, it felt braver than swan-diving off of a 50 foot high bridge into a narrow ravine. Why? Because after the dive comes the water, the exhiliration of the adrenaline rush, and a great anecdote. After drinking the Gordon and MacPhail Glen Grant 1950, there’s only the mouth, the finish, and then an empty glass. The glass will be empty! At any rate, we took the plunge, so to speak, and found it…amazing. Hot, but not burning. Spicy, but not spiced. A thrumming on the gums. A gumming on the thrums. A tongue ready to storm the Bastille! My mouth expands to fit my imagination and I get the caramel corn of the Aesir. A cascade of new sensory input: Hard candies repurposed as lawn tools and Neiman Marcus lollipops handed out to customers queued up to buy cashmere intimate wear. Squeezing sap from a Victorian era wardrobe. Panpipes from an Incan tomb. An obisidian knife from an Aztec tomb. Artisinal anise made in bronze cauldrons at street fairs populated by troupes of tumblers, jesters, jugglers, and jongleurs wearing jonquil perfume. Premium aged butter rubbed on rack of lamb from the hecatomb of Jason of the Argonauts. All peridontal problems miraculously cured! 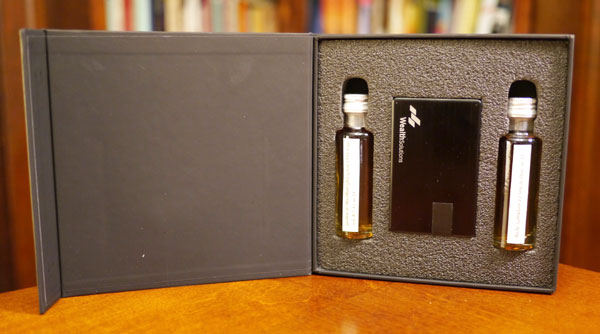 Rating:
On the scale of Amazing Things That Began in 1950 an are Widely Spread Today and Deeply, Deeply Appreciated–
The Gordon & MacPhail Glen Grant 1950 from Wealth Solutions is the combo platter of the Transistor and the Credit Card–The transistor revolutionized electronics. Without it, you wouldn’t be reading this review on your computer! No pocket radio, let alone a smart phone. The Diner’s Card revolutionized financial transactions by setting the notion that one might be able to travel around and buy things with the promise of paying later—and let’s face it, without a credit card, you probably wouldn’t own the computer/tablet/phablet/phone that you’re reading this on. The transistor and the credit are card are two points of a Platonic form of a triangle. The third point, affixed in the firmament? The Wealth Solutions Gordon and MacPhail Glen Grant 1950, obviously. QED.


–Our thanks to Wealth Solutions for the sample!