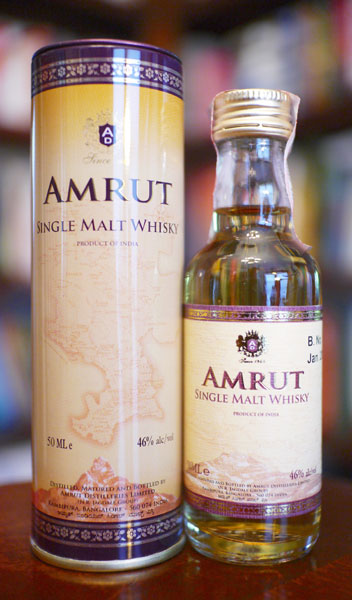 Tasting notes:
Nasally, this Indian dram is like a candy shop in which a fire extinguisher went off: there’s fudge, butterscotch caramels, honey-lacquered lollipops, and boysenberry gumdrops strewn about. After wading through those, on the back wall you find licorice whips used as props in a children’s adaptation of Pulp Fiction (“Mommy, what’s a gimp?” “Honey, just watch. You’ll see soon enough.”).  But also amidst the delicious detritus you find Wonka’s Malignant Sea Urchins™, dark plum tea, and pineapple shooters formed into soft shelled bullets.

Orally, the butterscotch moves quickly to the back of the tongue, as if it’s being chased by a raspberry lollipop (the flavor that follows it). There is a titter note, or maybe it’s a barter one: one way or the other, it’s a mix of tart and bitter. The rate at which this one aged is remarkable. There’s no angel’s share to be lost here; rather, it’s Shiva’s share, or that of all of the many armed gods at once. Alas, such are the perils of distilling in a polytheistic country.

Finishally, the whole of the dram is remarkably reverberous. It’s concentrated and powerful, like a handful of stone fruit pits ground by a sandstone pestle into a pine cone pesto. Almost exactly like that, actually, except more reverberous.

On the scale of accelerated aging processes–
The Amrut Single Malt B., No. 14, 2010 is putting a peach in a paper bag to ripen it–Far less dismaying than having someone serve as President for four years, and offering much tastier results than putting cherry wood in a tanning bed, this one brings with it no substantial downsides.