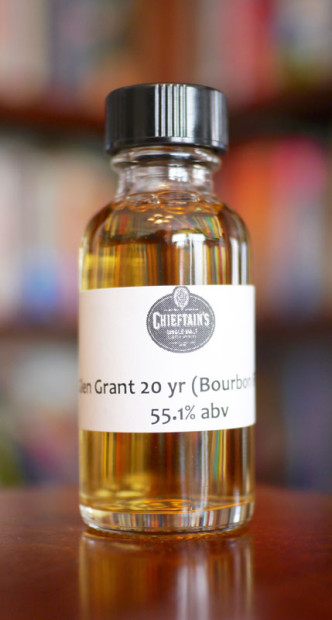 Tasting notes:
The Chieftain’s Glen Grant 20 year old, bourbon finish opens with lemon drop fudge lightly—or perhaps heavily—dusted with sawdust that’s wafted up from a mouse’s wood-working shop. It was unclear if the lathe was being used to produce tiny toothpicks or well-balanced Cat Swatters™. The overall gestalt of the rich aromas reminded me of the time I was stuck with Hugo in a yew wood clock in a London tube station.

[John: Bill! It wasn’t a “yew wood” clock, yew idiot! And it was a Paris metro station! And it’s fictional!]

Ever the stickler for details, aren’t you? Anyways, I also got dried papaya chopsticks used on rubyfruit grapefruit sushi while I was luxuriating in an amniotic fluid hot tub. (You all got that too, right? Guys? Guys? Hello?)

The mouth is bright and electric; it’s pixie dust enrobed with bioluminescent clouds of squid ink. It’s the kind of whisky I love: While a manly man, a mucho macho unmenschly man who’s quite insecure about his *maltgonewildmaltgonewild* might call it a girlygirlygirl’s scotch, I call it the Nectar of the Shekinah, and am glad of the opportunity to drink deeply of the feminine divine essence of the Trinity. Truly, it’s a tangerine dream swaddled in cotton candy made from molasses aged in honeycombs. After that, broken dreams from Pinewood Derby disasters that are mixed into Belgian truffles swarm my upper palate like zombies in World War Z.

The fruit, for Stephen, fades to a bitter barky aspirin-y willowy chewable tablet. (He’s still really disappointed that Louisiana Governor Bobby Jindal dropped out of the Republican primaries.) To be fair, he also found it to be like the post-pyrotechnic-firework-blast lingering smoke that hangs skywards, streaming slowly upwards before dissipating (like Bobby Jindal’s presidential aspirations). Amidst the glowing gold, I found it to be like the dot of the eye in the Yin or the Yang. “Do I point out that ‘Yang’ has no ‘i’ in it?” John asked “wittily.” I ignored him, or rather, the CGG20yo, BF (as I whisper it’s name to myself) drew me back in, much like Al Pacino in the Godfather, Part II.

On the scale of extremely powerful, spiritual women–
The Chieftain’s Glen Grant 20 Year Old (Bourbon Finish) is , , , , , , Ruth Bader Ginsburg–The Notorious R. B. G. is the brilliant Queen Bee of the Supremest Court, and…well, really, that’s all that needs to be said.

–Our thanks to Chieftain’s and ImpEx for the sample!