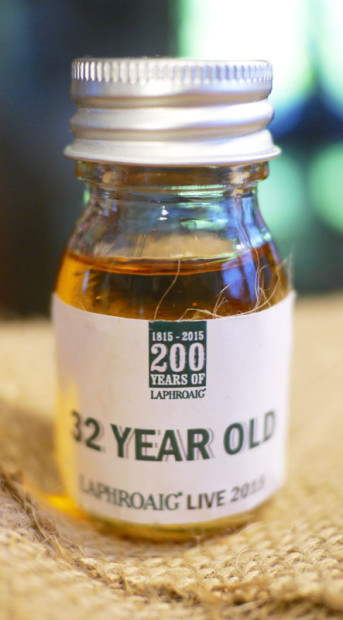 Tasting notes:
Like an unsettlingly gorgeous woman might, this dram made us veer into the inappropriate, even with our descriptors: it’s integrated perfectly, as we imagine a woman’s locker room at a high-end spa would be. It noses like a canary yellow diamond, nestled deep in the valley of a double black diamond-rated décolletage. It smells like Cupid’s soiled diaper, like victory, like teen spirit. My goodness.

The mouth is a bit thin, but it’s thin the way a cashmere sweater is thin. But then we realized it has the mushrooming strength and subtlety of the interior of a chrysanthemum (which is the Inception of flowers) or perhaps of panspermia. And that last bit wasn’t as inappropriate as it may have sounded, but such are the perils of being in the presence of ridiculous beauty–and a slight raisiny note, or perhaps it’s blackberry jam.

The finish is super long, but not particularly strong. It’s the aftermath of a first kiss with a new love, but the next afternoon. If smoking cigarettes were like this instead of being nasty, I probably brave the health risks–and it’d never hold me back from trying to kiss someone.

The exquisiteness of this dram led Bill to wonder aloud: if each bottle of Laphroaig 32 were only $50 a bottle, but each bottle drunk would take two months off your life, how many would you have? Fortunately, the actual price of a bottle of this whisky saved us from having to face the crazy dilemma, and probably added years to our lives.

On the scale of types of organisms on which panspermia seems to depend,
The Laphroaig 32 is the extremophile–No, that doesn’t refer to someone who would marry one of the Real Housewives of New Jersey, nor does it identify someone loves to BASE jump. It refers to little critters that are just as hardy as the resplendent aftereffects of experiencing this dram.


–Our thanks to Laphroaig for the sample!