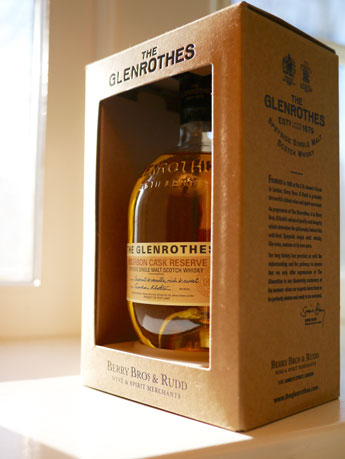 Tasting notes:
I like to imagine that the cool kids in the OC refer to this whisky as “Glen Ro.”  I wonder whether they would tuck a bottle under their arms, jump into their parents’ sports cars, and head out for long trips up the PCH or nighttime spins through the Hollywood hills.  When their designated driver gets them to the scenic overlook and they crack open the bottle, what will they find but the funk of a ship’s hold?  But in this case, the ship is a ship in a bottle, the bottle is a sherry bottle, and the hold has old mousetrap cheese in it, as hard a alabaster.  “Hey, Parker, stop snapchatting with Barrett gimme a swig of that Glen Ro,” for that is how I see these scene ending.

The straight bourbon cask that aged this dram cannot keep the beef stew at bay.  It’s the quintessence of Dinty Moore.  Spoon or Fork, I think to myself I sip and chew on this dram.  I’m like Buridan’s ass, but with utensils.  This is truly a dram that drinks like a meal.   What’s on my plate, you ask?  Cinnamon sticks that monkeys used in their hot cocoas, then cleaned their ears with, after waking up to find a black obelisk in their jungle floor.  Hickory slingshots used to fire candied ginger confections into the mouths of an elementary school chorus members.  Seasponges.

The finish finds me with the memory of smoking hardened honey drops in a briar wood pipe.  There’s some tang from a really rindy tangelo, the soggy edge of a phone book left on a stoop in a summer rain, and an unresolved major chord played on an imaginary piano.

Rating:
On the scale of cartoon character villains–
The Glenrothes Bourbon cask is Stewart Gillian Griffin from Family Guy—Stewie may be young, but he’s preternaturally gifted in curious and distinctive ways.  And, for those who come to whisky blogs with quantitative ambitions, Stewie is rated as the 95th best villain on a list of 100 by Wizard Magazine.*

–Our thanks to Anchor Distilling Co. for the sample!