Tasting notes:
Recently Struan Longbeard (approximate last name), the brand ambassador for Glenfiddich, gave us the chance to experience the Glenfiddich 15, deconstructed. By that was meant that alongside the Glenfiddich 15, we’d have the opportunity to taste the three components that constitute it. Always eager to pull the curtain back while simultaneously betraying our ignorance, we leapt at the opportunity. Brian Kinsman, the Glenfiddich Malt Master and William Grant & Sons Master Blender, evidently determined that the 15 should be comprised of 60% bourbon cask fill, 30% sherry cask fill, and 10% new oak cask fill, each aged at least 15 years. Afterwards, as per the Glenfiddich website, the blend is put into large Portuguese oak marrying tuns for up to nine months before adding Robbie Dhu springwater to bring the dram to the desired abv.

Two thoughts: First, if one wished to restrict the blend to 5% increments of the three different cask fills, then one would have to sample 20*20*20 = 8,000 different mixes to decide upon the *right* mixture. (Sign us up!) Presumably, though, a large part of being a Malt Master is the spectrum-artistry and knowledge-base to quickly narrow choices down—perhaps, for example, whisky aged in new oak would provide no more than a tannic spine. Thus, a Malt Master would never use more than 10 or 15% of it. Similar stories might obtain with the bourbon and sherry casks, and so it may be that Kinsman only needed to try a few dozen blends before settling on the above formula. My second thought was to review each of the bourbon, sherry, and new oak fill, then write the Glenfiddich 15 review using 60%, 30%, and 10% respectively of the words from those reviews. The more I thought about it, though, the sillier it seemed.

The bourbon-fill starts with candy, vanilla, premium suntan lotion, apple cores, the Lego Movie (Everything is Awesome!), and a lacquered shakuhachi blowing infrasonic dirges at the legendary gnat graveyard. The mouth tastes like going to sleep in the greatest bed in the world that has the best linens in the world on it. Upon waking, you take out your pencil that substitutes lemon rind for lead, and write, in your Moleskine planner, “Delicious LED-light bright caramel goodness eclipsed by a mango supernova. Also: Inverted vinegar and Calla lilies dried by Maria Callas.” The finish is a cronut with craisins, melting on the tongue like snow in April, and softly passing like ladybugs in December. It lingers like moonlight on a June night.

The sherry-fill noses like the inside of a rhinoceros-horn pipe used to smoke cheroot tobacco during a peace meeting on the Siberian landbridge. (Anachronistic? Yes. Apt? Yes.) The smell of your paramour’s auburn hair in early autumn as you walk towards a bonfire in an ex-Druid grove. Manic gyroscopes of maraschino cherries whirled with black tea and unripe fruit. The mouth is tart and drying, like an overly-critical 10th grade teacher. My palate is being desiccated by a weaponized sponge. Finishing with a saturated doormat on a north-facing home in Oregon that’s surrounded by blooming blue and black dahlias.

The new oak-fill was memorably likened to “escaping the room“—in the sense that we were filled with some dread going in, but felt just fine coming out.  The mouth is phenomenal, in an early 19th century Tübingen way (said Stephen, as he went full Hegel on us.) By that, if I may adduce my own experience, he means that the mouth is actually the most balanced and, remarkably, less tannic than sherry-fill. It’s the unknown Spice Girl, Buttery Spice, shaking her groove thing. Finishing long and strong like a championship team that came alive in the playoffs.

The Glenfiddich 15 itself noses like a sublimely light solera cask, or maybe a de-fruited lemon half used to float a baby shrew across an alpine lake. That is to say, it’s delicate and restrained, but not afraid to drop trou on a Tuesday night at the disco. Imagine a white ashwood chalice turned on a lathe at the Louisville Slugger Factory, coated with beeswax, then filled with starfruit pulp, apricot jam, and honey. Nearby, someone with very large hands is gingerly juggling five kiwis. The mouth is a milk weed milked by the fairest maiden in the kingdom; the butter made from it makes the fudgiest penuche fudge studded with the goldenest, blondest caramels and the lemoniest yellowest lemondrops. It finishes with an okey-dokely-doo oaken and butternut squash soup. John found bitter, ascerbic, sour notes…because of course he did. The rest of us found inner peace.

Rating:
On the scale of old adages whose truth feels unassailable and whose wisdom is always applicable—
The Glenfiddich 15, deconstructed, is the whole is greater than the sum of the parts–Runner-up ratings included jigsaw puzzles, mad scientists wielding test tubes and vials like nunchaku, and the philosopher Jacques Derrida. The last one there apparently founded the literary critical theory of deconstructionism in order to make English majors sound like blithering idiots and thus destroy the field from within. We reverentially bow to the artistry of Brian (Kinsman of the Secret Service).


–Our thanks to Glenfiddich and Struan Grant Ralph for the sample! 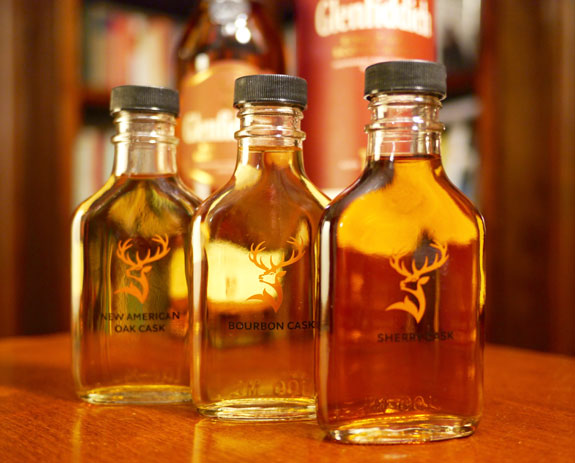