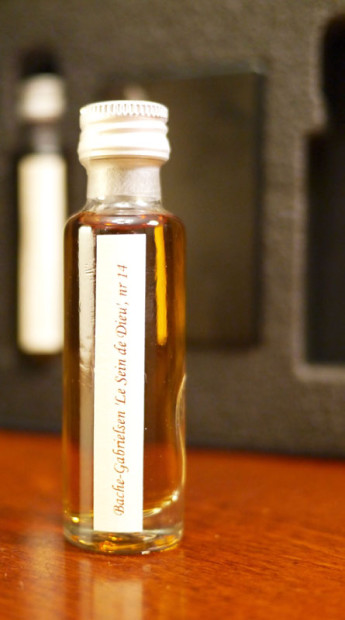 Tasting notes:
As I sit to write this review, I suddenly wish I were seminal Parisian poet Charles Baudelaire having nipped my laudanum, and thus in a position to let prose poetry—a genre he essentially created—flow through me as I try to find words and images to capture the Bache-Gabrielsen “Le Sein de Dieu’, nr 14. Were I him, though, even at the end of my life, I’d be writing about a blend of cognacs that were a mere 20-80 years old at the time. By contrast, stuck here in early 2016, my glass is a veritable time machine, transporting me back to a time early in the French Revolution. Typing those words is inconceivable; not in a literal sense, but I find it impossible to grasp the implications: Grapes that grew in 1790 were pressed, aged in barrels, bottled, and mixed with other cognacs from the early 1800s to the still-pre-phylloxera 1850s vintages.

The nose is at first soft, like a shy genie who, despite an eagerness to think outside the bottle, is reluctant to unleash her power upon the mundane world. Round and astringent with an afternose of amber beads set in a sandalwood picture frame surrounding a pastoral pastel allegorical landscape executed by Jacques-Louis David. A sinusoidal rhinogasm leaves my membranes quivering like the plucked strings of a period harpsichord playing music by Jean-Phillipe Rameau. While listening, at my behest, my valet juggles apples, lemons, and wedges of ripe double-cream brie, each tenderly swaddled in a swath of cheesecloth. (The jester took ill.) A footman wanders through carrying a leather attaché case containing moist tobacco leaves; he’s curious as to where I’d like them dried and using which wood. “Outside the chateau, burning oaken staves from the Beaujolais Nouveau just bottled,” I murmur, immersed in the various notes of wig talc and pomade, velvet cushions on the Louis Quatorze furnishings, my mother the Comtesse’s necklace of ruby cabochons, and delicate Limoges figurines.

The mouth. Chthonic grapes grown from vines whose roots run deep enough to crack the earth’s mantle. If Persephone eschewed pomegranate pips in lieu of a vineyard, these are the grapes she’d grow to make dessert wine for King Hades. In an inversion worthy of M. C. Escher or Salvador Dali, these grapes grow underground while the roots, exposed in the atmosphere, suck nutrients from the life-force energy of especially robust three-year old Arabian horses. Big apples grown in a flinty, chert-like womb, tethered by a slate umbilical cord. We’ve drifted far from the aristocratic atmosphere of the nose: We’re heading to the beginning of plant life on Earth, and if those early plants were sentient, they’d be asking which came first, the seed or the grape? It spreads like primeval kudzu claiming dominion over tectonic plates—and my soul.

The finish begins prosaically: a lemon-grass soup served in an ironwood bowl that was traded from a Carpathian monastery to a wandering minstrel group for a balalaika—not a lute. (It is an improbable swap, to be sure, but less improbable than the existence of the Bache-Gabrielsen “Le Sein de Dieu’, nr 14.) It gently metamorphs into a previously unknown opus of Berlioz that’s laid hidden for 150 years: the Symphonie Fantastique Cognac.

On the scale of things that exist only as a metaphor–
The Bache-Gabrielsen “Le Sein de Dieu’ Cognac, nr 14, is a time machine–First, it would *amazing* to have a time machine! If I had a superpower, I’d choose “time lordliness” over flying, invisibility, psychic control, and teleportation. Second, as I wrote above, the Bache-Gabrielsen “Le Sein de Dieu’, nr 14, actually is a time machine! The carefully aged, distilled, and blended juice of grapes from the 1700s and 1800s existed in my glass, and it took me through the ages and back again.

–Our thanks to Wealth Solutions for the sample! 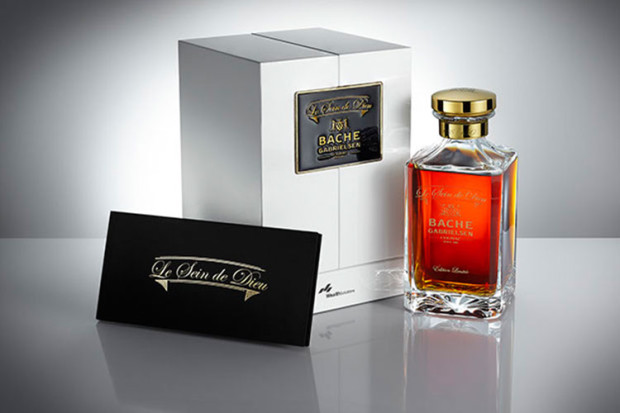 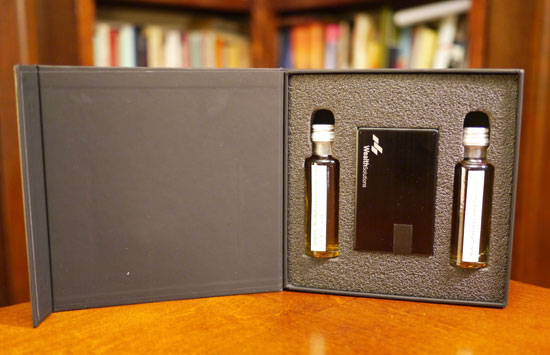