To say the Glengyle Distillery is singular among newer distilleries on the planet would be an understatement. First of all, it has a long history: it began with a Springbank family squabble, continued through a few ownership changes before being shut down and its stocks sold off in 1925, included two 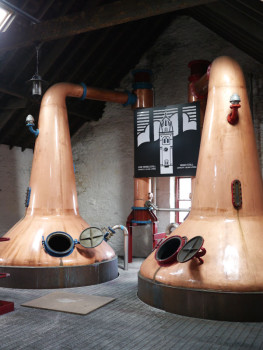 failed attempts (by folks associated with Glen Scotia) at rebirth in the 1950s, and finally saw a descendant of the original owners rebuild it and reopen it in 2004. Second, it was built more to help establish Campbeltown as a unique distilling region in Scotland than to run as a full-time distillery. In fact, the J & A Mitchell & Company (which also owns Springbank) runs the Glengyle Distillery only six weeks out of the year. Following the same employee- and community-first principles that they employ with respect to production levels at Springbank, J & A Mitchell & Company does not take full advantage of the production capacity they have at Glengyle because they do not think the market would support their doing so. Essentially, they do not want to end up hiring employees that they would likely later have to let go. Walking through the dormant facility, it is nothing short of remarkable to see that philosophy in action–or rather, in inaction–in this age of whisky booms and NAS expressions made necessary because production cannot keep up with demand.

The entire facility came in at a price tag of only £1.5 million (again, in 2004), in part because they were able to get some major parts on the cheap: the mill came from Craigellachie, and the stills came from the long closed Ben Wyvis distillery. And for those of you geeky enough about whisky production to wonder: no, the spirit produced at Glengyle will not reproduce that of Ben Wyvis. They had the shape of the stills changed (and the necks soldered on instead of bolted on) to produce the style of spirit they were looking for, which is meant to be a classic Campbeltown style, with a lot of flavor, spice, brine, and some smoke. And since Loch Lomond Distillers already has an expression called Glengyle (and apparently would not sell the name), the Glengyle Distillery produces an expression called Kilkerran. The name comes from the Scotch Gaelic and refers to the religious settlement led by Saint Cairán, which eventually became Campbeltown. 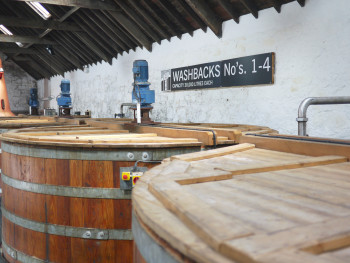 They have released around 9000 bottles of various editions of an expression they call Kilkerran Work In Progress since 2009, but the word is that a Kilkerran 12 is likely in the offing for 2016. They also contribute spirit to Mitchell’s Glengyle Blend. I was told that Glengyle Distillery might produce as much as 20,000 bottles next year.

I wish I could have gone through the facility when it was running. The design is quite open and much more sensible than that of many other distilleries: mashing, fermenting, and distilling all occur on the same level. Plus, the smell of a distillery running gives one a much better feel of its operation. And I would think that they probably get that one alarm that would not stop beeping the whole time we were there to stop  during production. But maybe not: maybe they just don’t mind it so much amidst the din of all of the machinery working. 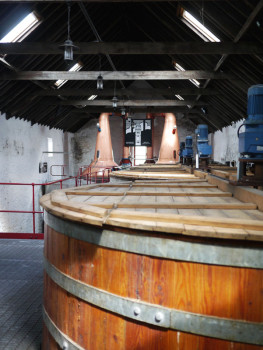 Finally, after the tour I had the great fortune to try a 2004 Kilkerran that had spent 11 years in a Port pipe before being moved, not long before I tried it, to a Bourbon hogshead. I should say up front that whiskies from Port casks tend to excite me, but I’ll also note that some of the early Kilkerrans I’ve tasted in the past had struck me as too young. But at 11 years, with the cask influences in this case, I was really impressed by this whisky. Suffice it to say that there are some very, very good things coming soon from Kilkerran, and you’ll want to check them out, if you’re lucky enough to get your hands on them. And if you’re even luckier and have the chance to get to Campbeltown to visit, you must. Our memories of our time there were some of the happiest my wife and I have from 2015, and that’s why I chose to make this our last post of the year. 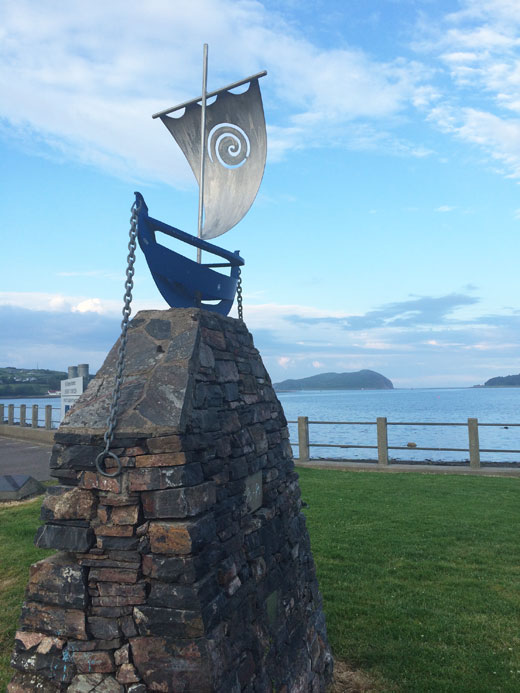