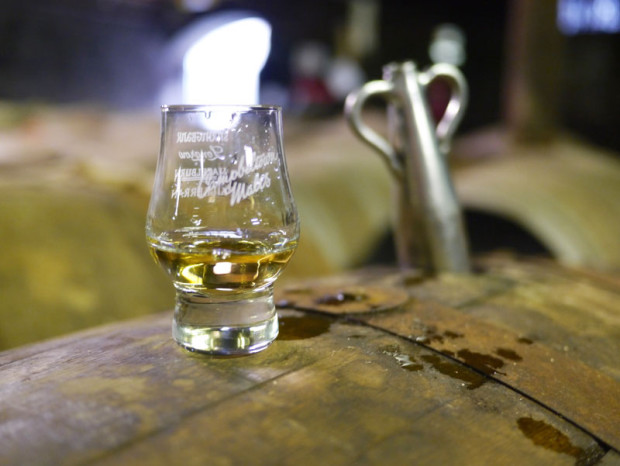 Unlike with Springbank, I knew relatively little about Cadenhead’s line of independent bottlings, aside from the fact that they had some connection to Springbank and that my whisky geek friends raved about them.  But when I visited Springbank, they had also arranged for me to meet with Mark Watt from Cadenhead’s that day–and to meet him in one of the Cadenhead’s warehouses on the distillery grounds. I could not have had a better guide to introduce me fully to the wonders that are Cadenhead’s. 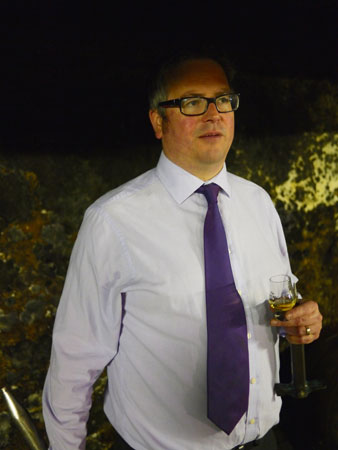 Mark Watt is a man at home in a dunnage warehouse, but listening to him, one gets the impression he’s equally at home perusing spreadsheets. Lest that give you the wrong impression, let me explain what I mean. Part of Mark’s job is to be aware of what Cadenhead’s has aging in its warehouses–and they have stocks from 105 different distilleries. Also, there was this wonderfully succinct response he gave to my naive question about stumbling upon amazing casks aging in some lost corner of a warehouse: “You don’t find casks in warehouses, you find them on spreadsheets.”

Imagine a cheerful whisky geek who knows his stuff so well he doesn’t feel any need whatsoever to flaunt his knowledge or expertise, even as he’s giving another whisky blogger a tour of his facility. Or if your experience with some whisky geeks makes such a thing hard to imagine, then just try to think of a whisky professional who has a twinkle in his eye that would rival Old St. Nick’s–and a devilish sense of humor that would be right at home writing for The Malt Impostor–and you get the idea. But if not, consider another quote, this one without any particular 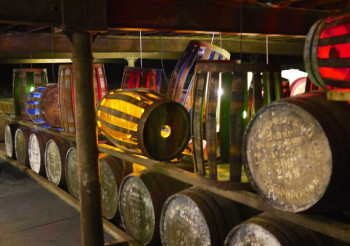 context: “The best whiskies are matured in the nastiest warehouses.” (But this was no nasty warehouse: it was a classic dunnage warehouse, but one adorned with colorful lamps made from pieces of empty casks that gave a glimpse of an operation that does not take itself too seriously.) With Cadenhead’s, just as with so many other distilleries, blenders, and bottlers we’ve visited, it’s the people that contribute most to the great experiences we’ve had. 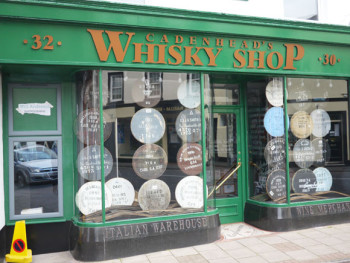 Cadenhead’s is Scotland’s oldest independent bottler, dating back to 1842–more than 50 years before the founding of Gordon & MacPhail. Their collection of single cask offerings boggles the mind and prompts desperate checks of bank balances. If that weren’t enough, they also bottle two proprietary whisky blends, all sorts of rums, a few gins, world whiskies, and whiskies from closed distilleries. The Cadenhead’s Whisky Shop, which is also the place to get all the Springbank bottles and swag you can carry home, inspires outright despair in someone like me, at least at first. The selection overwhelms the senses, and then the realization dawns that hundreds of these unique whiskies must be left behind

and untasted, because there just isn’t enough money–or room in my luggage. But there are multiple saving graces, one of which is the fill-your-own options, with a pseudo-solera setup and several bottle sizes available. One prize smaller bottle was a 200ml Longrow that I shared with my fellow Impostors (and an honorary Impostor) on a lovely day toward the end of this past summer.

I won’t detail everything Mark let me taste in Cadenhead’s warehouse, but it reflected well the formidable range of whiskies Cadenhead’s regularly bottles and sells. I will, however, acknowledge something we’ve noted on this site many times: we Impostors are very fortunate and never cease to be amazed by how well many in the whisky world have treated us.