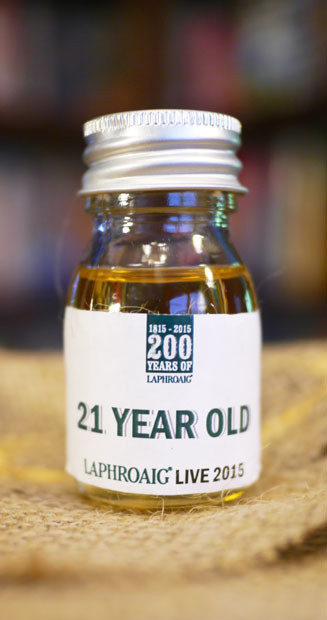 Tasting notes:
What, really, can I say about such a wizened expression from such a venerable and favored distillery? That it has the smell of Rapunzel’s hair conditioner? That she keeps it in a dragonfly wing bottle? That she wraps the bottle in moistened pages of the Herculaneum Papyrus? The nose on this insists on the truth: this is a near perfect Laphroaig, harmoniously balanced. I am watching a juggler gracefully juggling the six elements in the alkali metal group on the periodic table whilst his handlers ready the six elements of the alkaline earth metals. They will add the elements, one by one, until he has all twelve in play.

The mouth is seaweed-wrapped scallops, in a manner suggestive of bolos, then placed in a Big Green Egg. Whipped butter pushed into poorly-cleaned snail shells, then refrigerated. Cloven-hoofed e-cigarettes held in Marie Antoinette’s long fingers. Let them have vape!

The finish prompts me to raise the question of whether it is prettier than the Laphroaig 18, and I’m not sure that it is. But more elegant? Yes. And I would think that when this appears as a Pixar character, Kathleen Turner can do the voiceover. It is unctuous without being oily. And there’s a wonderfully clean toffee note; think of a Clark bar in the hands of Clark Kent.

On the scale of facts about Kathleen Turner–
The Laphroaig 21 Friends of Laphroaig Exclusive Limited Edition is the fact that her voice appears in Simpsons as the voice of Stacy Lavelle, the creator and voice of the Malibu Stacy doll–Hmmm…  An iconic voice doing the voiceover of a character doing a voiceover.  Yup, that pretty much gets at the depth of the whisky now sadly departed from my glass.

–Our thanks to Laphroaig for the sample!