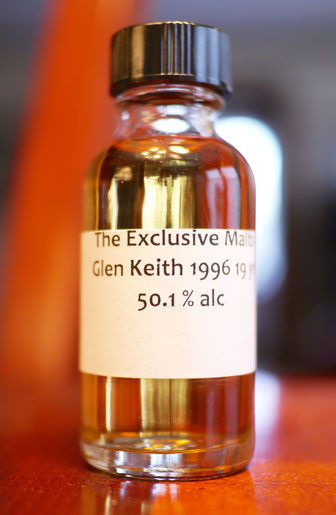 Tasting notes:
The Exclusive Malts Glen Keith Richards 1996 19 yo, much like the man, much like the guitarist, is a vigorous study in contrasts. (Who knew he owned a distillery? I’d’ve believed a poppy farm in Thailand, or even a company run by a stoat-faced, disbarred, weirdly-whiskered, homeopathy-believer lawyer that manufactured fecal transplant pills.) On the one hand, there’s the first rush of a late-afternoon orange grove having lemonade spritzed on the leaves to thwart aphids. On the other hand, there’s a faint scent of Marlboros and white carnations so deeply embedded in clothes that even after laundering, it tickles the skylights of your sinuses. It’s so balanced it’s almost as if the different aromas agreed to not let any particular one assume disproportionate power or influence. (Who knew that different classes of esters read the Federalist Paper No. 10? Or was it the Festeralist Paper No. 10?)

The finish breaks the tense stillness of my soft palate like being hit by a mattock sculpted of grilled veal chop. It opens me to a brighter future, and I can, in spite of the many first-world horrors that surround me, find hope in a lilac bush that sprang up, seemingly irrevocably, behind my uvula. Spectacular.

Rating:
On the scale of Keith Richards’s–
The Glen Keith 19 Year 1996 from The Exclusive Malts is Keith “Richards” Lockhart–He’s the director of the Boston Pops—and his middle name is actually “Alan”—but somehow the two Keiths are the yin and the yang of this dram. There’s the delicate classical sweetness, fruit, nectar, and floral perfume…and the cigarettes, heroin, bungee-jumping, hell-raising, reality-shattering, blues-inflected, rock and roll.