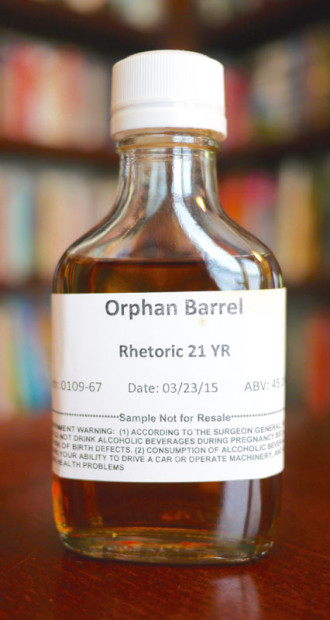 Tasting notes:
It opens with rhinoceros tears stored in a hollowed out dried swamp reed stuck like a straw into a bowl of corn chowder strained through a titanium/electrum sieve. That is to say, although you might find some of the components available at your local bodega, others are more scarce in the urban jungle land. The strained chowder is being consumed by a famous cardiologist in her famed all-cedar operating theater, with the surrounding rows of the amphitheater conspicuously not filled by residents. She notes to the empty gallery that the potent blend is herbaceous, bodacious, salacious, and as mendacious as a snake-oil salesman rubbing linden leaves between his palms while caterwauling about his luck. An Oscar™-worthy performance.

The mouth is redemptive: Rich, astringent; the mouthfeel equivalent of the afterglow of fireworks on the retina. There’s a twang of rye, like a banjo case left on the back seat of a New York City Uber driver’s 2011 Honda Accord. (Stephen, we’re still getting paid by Honda for product placements, aren’t we? Make sure you take this parenthetical aside out of the published review, thanks.) It’s light, too, and piercing; if it were a toy, I’d say that it was a joy-filled 7-year old, pushing pegs through the thick black construction paper of Hasbro’s Lite-Brite®, making things with light. It stays herbaceous, like a sachet pulled by the TSA from the cavity of a cis-turkey. Although, older, it grows younger and greener, dancing and prancing in my mouth, a Bourbonesque Benjamin Button burlesque.

The finish is part and parcel of the mouth: Nothing abrupt, a smooth segue to Orphan Black.

Rating:
On the scale of well-known tropes about Hegel–
The Orphan Cask Rhetoric 21 Year Old Kentucky Straight Bourbon Whiskey is Thesis, Antithesis, Synthesis–The thesis is “Maximal aging for maximal smoothness and flavor.” The antithesis is “Woody Shaw woodenly playing the Woody Woodpecker theme on his wooden clarinet for John Wooden.” The synthesis is “correctly finding that sweet spot in which the whiskey gets aged, gets smooth, gets up against the wooden wall, but never quite crashes into it.” It’s like a phenol and an opposite chirality phenol meeting at the Big Bang and producing a universe of flavor. And phenols.

John: Does Bill even know what phenols are?