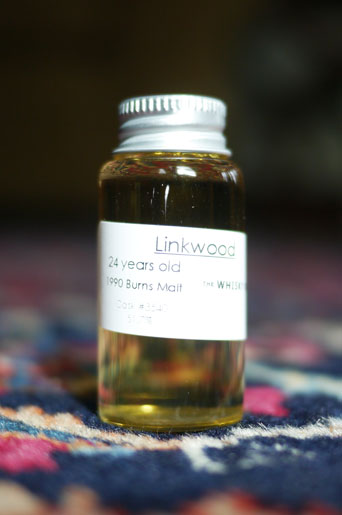 Tasting notes:
If you could purée a biscuit with butter and honey that comes only from blue collar worker bees in the USA, and if you could take that biscuit puree and put an even better honey on that (preferably one fashioned by the unwilling servant bees of an aging and increasingly constitutionally insignificant Queen–in other words, one of British origin), you’d be getting close to the nose on this dram. Want to get closer? Add crumbles of a rock candy made from pure Scottish wildflower honey produced by true, free, and kilted Scottish bees living free amidst the grasses and heather of the Highlands, and you’d be real, real damn close. Make the whole thing into a lacquer and layer it expertly over a side table stolen from Versailles, and you have it precisely.

The mouth is hot (it is 51.7% abv, after all), but thankfully of a piece with the nose. It’s less grassy and heathery than the nose and more tangy and tart. But it’s so alive and lovely on your palate, you won’t quibble about that–nor would you quibble about a stubbed toe, a broken hip, or a mild angina (though you should probably consider making something of a fuss for that last one, if that’s what you have).

Let it finish on your tongue, and you’ll be waiting until next Tuesday. And you’ll do so with green apples and faint toasty smoke and a remarkable sense of well-being. There’s also might be some hint of astringency lurking behind all of the good stuff, but there may not. I couldn’t be bothered to look for it again, so awash was I in the alcoholuminescence of this whisky. In other words, it’ll flat light you up.

Rating:
On the scale of under-appreciated names–
The Linkwood Burns Malt 24 Year 1990 from The Whisky Barrel is Lucifer–Literally translated, it’s “light bringer,” and in Latin the term was used to refer to both John the Baptist and to Jesus. Also, this one will tempt me for the rest of my days–or at least for a good while after it’s sold out.
–Stephen

–Our thanks to Alastair and The Whisky Barrel for the sample!