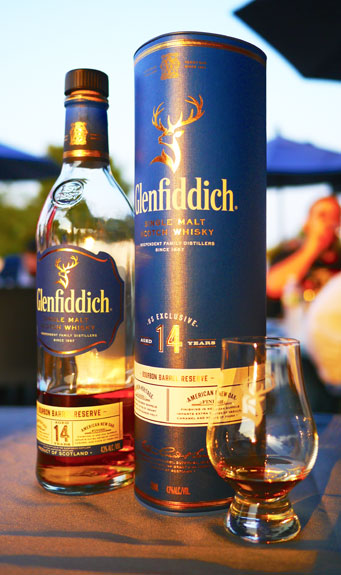 Tasting notes:
The Glenfiddich 14 opens with seabed–but not a salty, tarry, lobster-pot-fisherman’s-boat kind. Nope, it’s an ocean of buttermilk, with a brilliant lassi-like soap on a still-living sea sponge doing whatever it is that sea sponges do. There’s also a velvet sea anemone, waving it’s little arms around in the buttermilk currents, and it’s daubing fine parfum in its many little sea anemone armpits. Which, to be clear, don’t sweat, obviating the need for the parfum, but still, that’s one classy sea anemone. There’s even a bowl of hybrid lemon apricots: Lemicots or aprimons? Unagi truffles–the fungus kind of truffles–roasted with pierogies that nestle amongst candied shiitake mushrooms. John got Ham, Noah’s son, not the meat, because of course John did.

The mouth is deliciously light, like scintillas of rainbows erupting from a sunbeam penetrating the buttermilk and getting bounced around the faceted lead crystal stopper from a Lalique deco decanter, which is filled with compressed Fresca®. The Fresca® goes on a vaping spree (with the smokin’ eel) and explodes in your mouth, then shoots out your nose in snot ribbons that are woven by bored angels into a shawl you tenderly drape around your beloved, who, remarkably, is not grossed out. It’s also creamy–dare we say, “buttercreamy”? And overall, it’s like getting a five-minute long bout of post micturition convulsions in a cold, all white-enamel tiled lavatory.

The finish sings with the previously-mentioned angels, and it does all the harmonies as well as scat-singing with Ella Fitzgerald and Louis Armstrong. It sings with humpback whales and the Mormon Tabernacle Choir. It’s the angels’ share, given back by the angels after they’re done running it through dolphin cloud fountains. It’s a new compass rose petal, pointing directly at Planet Wow.

Rating:
On the scale of of bargains found at ebay–
The Glenfiddich 14 is acquiring a Baccarat Glass Five Piece Loch Ness Monster for $11.43, because someone mislabeled it as a sea anemone skeleton–In other words, it’s a AAAAAAA++++++ transaction; a bargain to remember the rest of your life, and a new thing to leave on your table and/or sea bed on Planet Wow.
–Bill

–Our thanks to Struan Ralph, Janel Webb, and The Glenfiddich for the sample!