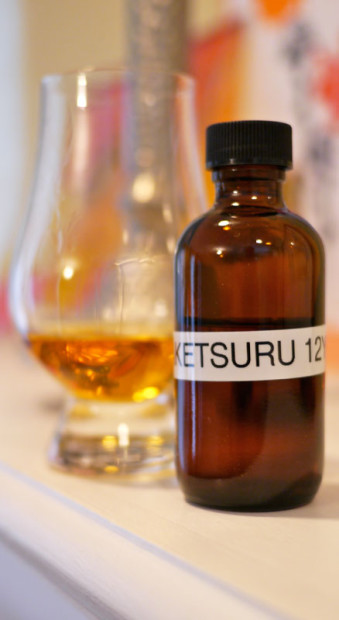 Tasting notes:
Nosing this dram is like opening the door to a closet that turns out to be four times larger than you expected it to be. And finding a perfectly cooked venison steak there. Next to a huge slice of chess pie served on an alder slab. When we really focused in, we found hints of the end of a cola Slurpee® enjoyed on a steaming hot summer day.

Tasting it is like drinking a brew made from fruits unknown to a western palate. It’s like instant Malt-O-Meal® Touch-O-Smoke flavor, only much, much more satisfying than a ready to eat porridge: the smoke is from burning letters from an ex or the notes from your rival’s scientific discoveries. The smoke is so subtle, so refined, it could’ve been trapped in blown glass–or even amber–a century before being released to flavor the malt in this dram. In other words, it’s a transgenerational smoke profile we’re talking about here.

Rating:
On the scale of (western) fruits that make for some good grilling–
The Nikka Taketsuru 12 Japanese Blended Malt Whisky is peaches–Oil them a bit, sprinkle them with sugar to induce extra caramelization, and slap them on a medium hot grill for while. And you can even get good results with ones that are slightly underripe. Nothing else quite compares.
–Stephen