Glen Scotia’s fortunes have tracked that of the overall industry for a long time now. For example, it was shut down during the mid-1980’s (when many other distilleries were shuttered or, like Port Ellen, closed forever) and reopened in 1999. In recent years, Glen Scotia has ramped up production from around 100,000 liters of spirit per year to what will soon be 500,000 liters per year. All of this with only two stills and none of the spirit these days going to blends or independent bottlers.

With a fermentation period of around 100 hours, the ramp up has required new washbacks, and they now have nine in total. And for all that production, the distillery has only seven employees. Actually, many distilleries produce more with fewer, but they do so thanks to a fair amount of automation. Not Glen Scotia. It’s a hands-on process at Glen Scotia, and Distillery Manager Iain McAlister has his hands on every aspect of production, including checking on the casks aging in the warehouses on site.

Speaking of casks, Glen Scotia ages all of its whisky in first-fill Bourbon casks, but then every expression uses a Sherry finish of some sort or other–usually Oloroso or Pedro Ximenez and usually for around six months. That combination, along with the Campbeltown terroir, yield a character that is briny and meaty.

In recent years, also in line with the tectonic shifts in the whisky industry, Glen Scotia has moved from a 12 year old to a no age statement expression called Double Cask. At the same time, they redesigned their labels and packaging and did so with stunning effect. This is not “Hey! Look at me!” gawdy branding; this is timeless, classy design that looks right at home with the fine tweed goods Glen Scotia sells in its distillery shop. 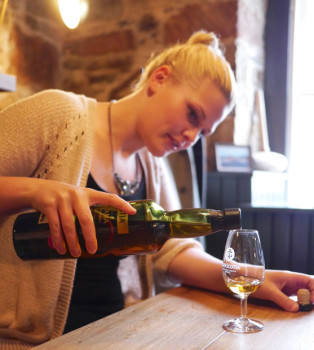 And one cannot overstate the importance of the aforementioned Campbeltown terroir nor of the people who grew up and live in it. These both inevitably have an effect on the final product, but when you make the trip to Campbeltown, they add something extra to the experience and help you see why this small area and its three distilleries warrant designation as a unique whisky region. Both Iain McAlister and Shannon Brodie from the distillery shop were very generous with their time and went out of their way to make us feel more than welcome–an experience that I soon found was all too typical of this lovely small town by the sea.

Please scroll down for more photos.