[Editor’s note: I forgot to provide John and Bill with Grouchos for the event, and they largely forgot to take pictures during it (the latter being a testament to the overly engaging nature of the event itself). As a result, I’ve photoshopped some Grouchos on John in several pictures here–you know, to protect the “innocent.”]

John and Bill: On the Boat, Off the Leash, and into the Doghouse (Stephen was in Dubai) 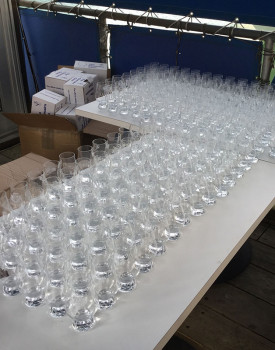 John carefully poured varying amounts of distilled water into each Glencairn and then, using them as a glass harp, played John Cage’s 4’33” until he was directed to the buffet line by two quite sturdy men.

Bill’s Hot Take: Somehow John and I managed to skip the test; it seems as if there must have been a questionnaire or something that ensured that only good-looking, interesting people with great taste (except us) were allowed on the cruise! Everyone–truly, everyone–that we talked with, including guests, ambassadors, pourers, organizers, boat staff: all were wonderful (and good-looking.) Oh, and John decided it would be appropriate to dress like a low-level meth dealer extra from Breaking Bad. Go figure.

The weather was perfect, the boat was rock-stable, the food was delicious, and John ate like a prisoner upon his release; like a wrestler indulging after successfully crash-dropping the weight to pin a guy three weight classes below his normal class. Despite my decision in advance to restrict myself to only sipping carefully and thoughtfully from the many, many whiskies, and to have only one plate of food and no desserts, I, uh, was a fallen Angel’s Envy, a serial over-indulger in the many delights on offer, including a cigar out on the deck taken with Andrew, Jerry, and various other members of the Rhode Island Highlanders Pipe Band. (Alas, they didn’t bring pipes and drums with them, although a few were kilt-clad.) 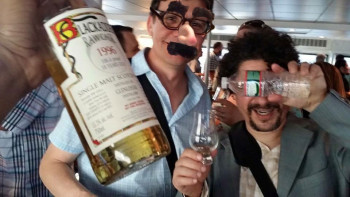 Thanks to Bikram Singh of Norfolk Wine & Spirits for this photo

A few Julio’s Liquors specials impressed me at the outset: An 11 year old single-cask Gordon & MacPhail Glentauchers and a Scotch Malt Whisky Society offering, the 4.198 “Pigs in Plaster.” Moving laterally took me to Jeffrey Karlovitch, the former blender for Lost Distillery and a Whisky Guild Founder, who is now importing Japanese whiskies (Akashi and Iwai) and blending cognacs for Kelt. I suppose for his next act, he’ll juggle seven lit torches, two chainsaws, and a quarter-keg of otters. Of the whiskies he had on offer, my favorite was the Akashi White Oak. And the Kelts were tremendous. As faithful readers may remember, I’m a cognac lover from long ago, and I moved on from them only because they priced themselves out of my bracket. In particular, I thought the Kelt Commodore was fabulous, better even than the Kelt XO. We moved on to the Laphroaig table, and even though our friend Simon Brooking dared to be on vacation–did he hear we’d be there sans Stephen?–we couldn’t pass up a chance to have the 18 and the Laphroaig Select. Both were…surprise!…delicious. 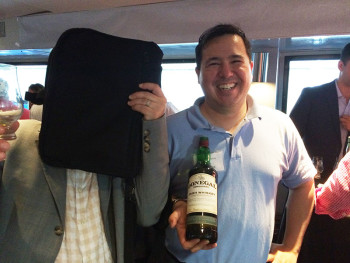 After that, we renewed our acquaintance with Bikram Singh, who was right next to David Cantina. [John: That’s “Catania,” you idiot!] Honest mistake, John! Geez. Anyways, between the two of them, we tried a lot of great exotic things, including the Blackadder Glenlossie 18, Blackadder Lochranza 18 refill sherry,and Cadenhead’s Caol Ila 22 year single cask.  John also leapt for the Springbank 18 and later snuck back to get some of the Springback 12 cask strength.  There were also wonderful Amruts on hand and an assortment of Glencadams, including the rare Glencadam 21 (for the VIP hour).  Taken all together, this booth had enough to justify the price of admission. 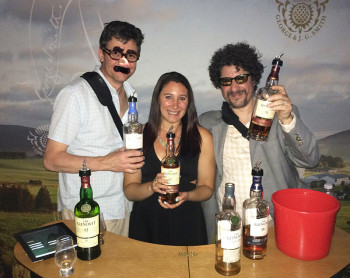 Could we let the evening go on without meeting Ross Graham, the Master of Scotch for Pernod Ricard, and Jess Russo from The Glenlivet? Of course not. We sampled the Glenlivets and found all to be refined, smooth to beatbox the band, and loquaciously understated. If that’s possible. We learned that the Nàdurra is now one of three varieties; the one we had was the First Fill (the other two are the Oloroso and the “classic” 16 year old). The 18 is probably John’s favorite, while I lean towards the 21, but as John noted, the Nàdurra is unassailable. We were foolish and slow, though, and missed out on the special limited edition “Chapter” bottle based on the polled tastes of the The Glenlivet Guardians. Many regrets: Even the sight of John weeping wasn’t able to conjure a second bottle out of thin air for us to try. 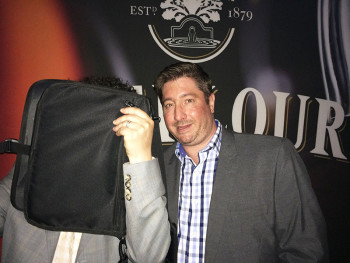 We also met Maurissa McGeary, who was repping and pouring Dalmores, because John had never tried the King Alexander III, which is still delicious.We also checked in a second time with Jessica Fuller, the Chief Organizer and Awesomeness Incarnate, Whisky Guildswoman, Keeper of the Peace, Hostess with the Twinkies, and the evening was over.

All-in-all, another great outing. If you could have been there and you weren’t there, you should plan to roll on down to New York, where you’ll have another shot at a glorious whisky cruise on August 27th.