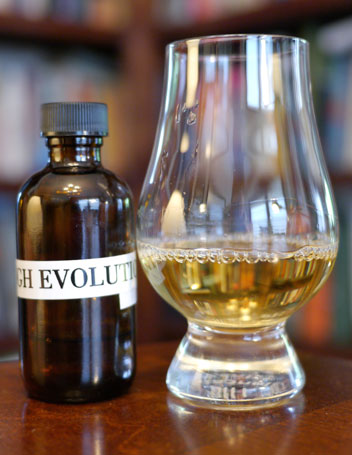 Tasting notes:
In honor of the field of Republican candidates for U.S. President in 2016, we can’t write anything positive about Evolution.

No, to be serious for a moment: we don’t believe in Evolution at all, nor do we think it should be taught in schools (again, we say this in honor of the Republican field).

Really, though: we do not believe this whisky was descended from apes. We prefer to believe that a divine being created it in seven days. What about the aging, you ask? No age statement. Problem solved.

Actually, that line of jokes so undersells this whisky, it’s just wrong. So let me try to right the ship a bit here: The nose opens with lemon orange sangria, but then comes some lovely anise, dried and then smoked in an opium den that was later used as the set for Inception—and I don’t even like the flavor of anise.

But it’s the mouth that steals the show here. This mouth would make a Republican Presidential candidate convert to science. Really, it’s that good: that guy would be in the lab every Sunday from then on. The mouth is straight nectar: sweet and perfumey, with a slight bitterness at the end. It’s like fancy lemon cream was aged for years in an apiary. The finish is light, with maraschino mandarin oranges dipped in black tea for you by a woman clearly out of your league.

Rating:
On the scale of lower animals I prefer to think of myself as descended from–
The Glenglassaugh Evolution is fish–Going from fins to arms and legs is really fun to try to get your head around. Apes are too easy. Use your damn imagination.