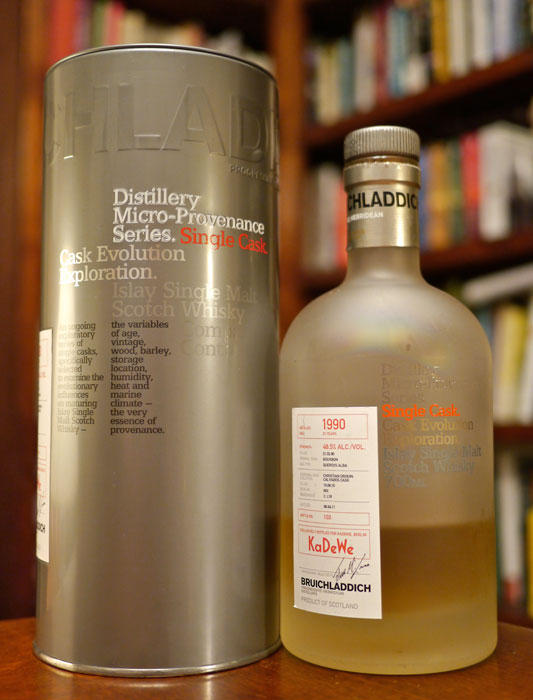 Tasting notes:
The Bruichladdich 1990 21 year KaDeWe bottling nose opens with wine, toasted oat bread with farkleberry jam, and a piping hot croissant with apple butter. The note is small and tight, but a modern classic: the iPod Nano of Bruichladdich…and, should you care to imagine it, a blended menage with Fiona Apple, Steve Jobs, and Gwyneth Paltrow. It’s like smelling forbidden fruit from the Tree of the Knowledge of Good and Evil, but not eating it.

The mouth is delicious and light. Smooth, spicy, and luxuriating in a sandalwood sauna. It’s like taking a “tiger cage” experience overnight at the zoo, if the bars were peat-smoked bamboo.

The finish is a long continuum with very little variation, including such delicacies as a pakora with chutney, lemon jambalaya, lemon’s skinning their knees on a rough copper sidewalk, and lemons juggled by a funny monkey named Syd Viscous who wanted to be in movies with either Ronald Reagan or Clint Eastwood. An old cedar deck festooned with bonsai orange trees that aren’t currently fruiting (and maybe never will). Old Sauternes fustiness, even though the extra maturation was in Calvados.

On the scale of department stores in Berlin–
The Bruichladdich 1990 21 year KaDeWe bottling is the KaDeWe, the Kaufhaus des Westens–It’s been around since 1907, and it gets 40,000 visitors per day. It’s hard to believe that Jim McEwan blended a whisky named after a German department store, but you can’t ever put anything past him!

–Our thanks to Stephen’s wife for giving him this bottle!