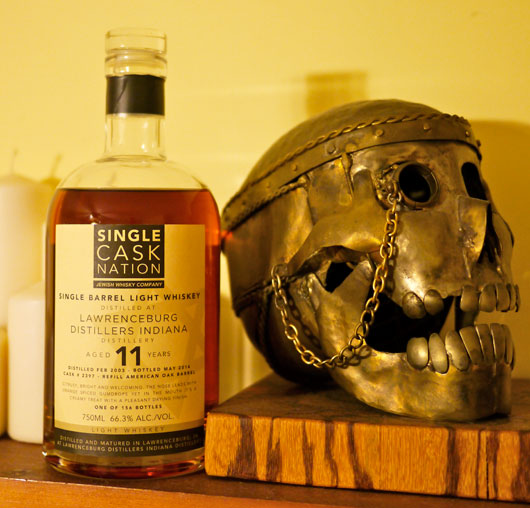 Tasting notes:
Within seconds of receiving his glass, Bill eructates “Mel Tourmaline, The Pink Velvet Frog!”  Stephen and I look at each other and then back at him.  Did you just drop acid?  No, he says, and then explains how it’s Mel Torme, the Velvet Fog, but with the semi-precious gem, tourmaline, which is pink in color, and by the time he gets to the Frog part I feel like I’ve dropped acid.

The nose is candied cinnamon sticks used to replace the metal rifles on toy soldiers.  Little Harold’s pacifism is really going to change gift giving from the grandparents.  Pecan Pie tartlets served at wedding photo shoot.  But at this wedding, the bridal party consists of flop-eared bunnies eating bananas.

The mouth moves me to consider the velvet on reindeer antlers.  Then I’m drawn to imagine a series of Elvises painted on the antlers by Bob Ross.  This is really rich and muscular, but also urbane and refined: a hollandaise used to strip a Queen Anne chair, and a béarnaise to refinish it.

The finish recalls nothing if not a 1:125 scale cardboard coliseum diorama with mice taking the place of the fearsome animals.  Clearly the handiwork of that overachieving 4th grader, Harold, and his penchant for what he calls “counter-hegemonic statement pieces.”  A few drops of water invite more of the floral, peppery notes but do nothing to dissipate the creamy center.  Contentment overspreads me like an angora afghan knitted by my aunt.

On the scale of self-flagellation appearing in a whisky review—
The Single Cask Nation 11 Year Old Light Whiskey from Lawrenceburg Distillers Indiana is my hereby admitting to the world that I sometimes lose steam in writing a review and fail to write a rating for it–Actually Stephen and Bill wrote that one for me and required me to publish it under my name as penance for my ********ery. But as examples of self-flagellation in whisky reviews go, it’s a singular experience and one you’d be hard pressed to match.
–John

–Our thanks to Tom for the gift to John–and to Single Cask Nation!