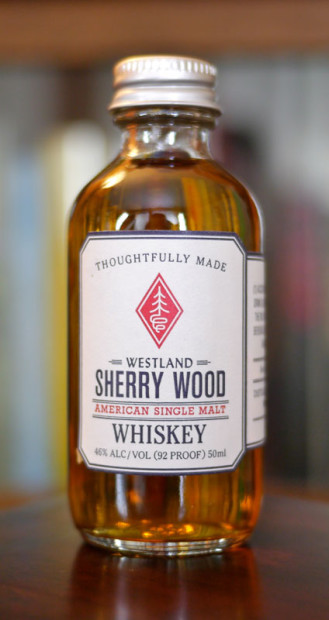 Tasting notes:
The Westland Sherry Wood American Single Malt Whiskey opens with the first fully retractable grass notes of an American whiskey, much like the Glendale Arizona “University” of Phoenix Stadium has the first fully retractable grass of any stadium in the world—Tifway 419 Hybrid Bermuda Grass, if you must know that particular detail. Speaking of Glendale, “I’m just reviewing this so I don’t get fined.”

Stephen: Bill! You have to review this! What about the nose?

“I’m just reviewing this so I don’t get fined.”

John: Bill! Isn’t there a strong presence of sherry?

“I’m just reviewing this so I don’t get fined.”

Stephen: Bill! Why are you doing this? Why are you here in the Malt Cave if you aren’t going to tell us about the nose?

*enigmatic smile as I walk past Stephen with the laptop*

When the grass goes, my goodness, butt (sic) there’s sherry, like the richly sherry-scented kitchen of your aunt when you stop over after school. She seems…excessively happy for 3pm, and a little clumsy, too. None of it makes sense to 11-year old you. Besides the sherry, there’s a spray of nasturtium—family Tropaeolaceae—in a small blue vase that she bought from artisan glassblowers who sell their wares in a boutique just a few blocks away. She’s baking a meringue pie, and the browning of the stiff eggwhites says to you, in a whisper that you’d later identify as sultry, but you’re only eleven, the eggwhites whisper, “Worcester sauce on a rare porterhouse steak.” You’re baffled, but not upset: Your aunt’s house is a wonderland, and you’ve taken the red pill.

The mouth is a delicious maple syrup tapped from specially-selected hydroponically grown maple trees raised in Biosphere 3. (You believe there are only two Biospheres? You must also think that astronauts have landed on the moon!) It’s slick, a bit oily like the amazing rainbow-like refractions from the small amounts of oil on a road after a rainstorm, and lipid-y; really, lipidicious like ScarJo’s lips. It’s simple and uncomplicated, like the bamboo incense your aunt burns while offering sashimi without wasabi, because let’s face it: You’re eleven and your sinuses don’t need to be cleared.

The finish is sherry syrup mellowing on the legitimate offspring of black cherries and “Sugar in the Raw” packets, a mostly civil union consummated on the tannic-y Ikea teak table in the wee hours of the morning when everyone else is asleep. Drink this then, while you’re asleep (and no longer eleven) and drink it now, if you don’t pour it on blackstrap quinoa pancakes with, yes, maple syrup.

On the scale of mentholic cigarettes–
The Westland Sherry Wood American Single Malt Whiskey is the Kretek cigarette of Jakarta, Indiana.
Stephen: It’s Indonesia, not Indiana.

Clove cigarettes may be the affectation of hipsters, but let’s face it, hipsters often are on the bleeding edge of greatness and authenticity. So, as quickly as you can, snatch that bottle from their hand! You win, grasshopper.


–Our thanks to Steve Hawley and Westland Distillery for the sample!