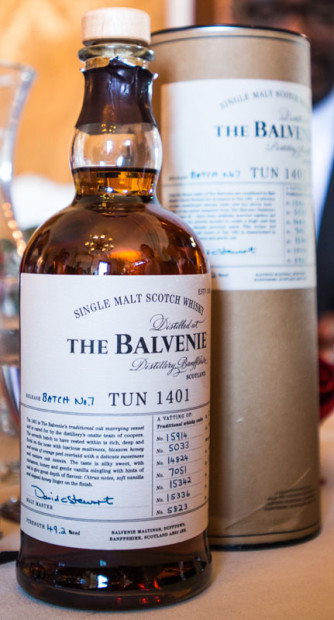 Tasting notes:
I opened this whisky at my wedding. Who cares if it was a brunch wedding–it was five o’clock somewhere, right? Plus, as special occasions go, they don’t get any more special. This bottle I’d picked up at auction, a travel retail only expression that also happened to be the only Batch of Balvenie Tun 1401–other than the elusive Batch 1–that we had not tasted, was an obvious choice. A whisky named for a marrying tun to be opened at a wedding. A match made in heaven.

The Batch #7 evoked all sorts of comforts of the family surrounding us, with notes of pecan and cherry pies fresh from the oven and held tantalizingly beyond our grasp for that short time before they would be devoured. From there, the notes grew more sophisticated: caramel coated celery sticks dotted with kirsch-soaked sultanas in an effort to produce an artisanal version of “ants on a log” for the hipster children we never were, but now feared we’d grown up to be. There were also notes of my stepfather’s cherry tobacco, but ambitiously smoked through a port pipe instead of his well-worn Meerschaum, and the angelic smell of the burning candles at the altar I tended as an acolyte. The soft mattress topped with all of the coats at Christmas had nothing on the comfort and inner warmth of this dram. It’d be satin luxuriousness if that were ever not creepy. The experience was rich with lingering tannins and low, round notes, including one of the way my Grandmother’s iced tea tastes in my memory: an inimitable combination of strong leaves, Mississippi water, pure sugar, and Southern love. Truly a spectacular dram befitting a momentous occasion and the family ties that bind us together.

On the scale of matches made in heaven–
The Balvenie Tun 1401 Batch #7 is the Malt Impostors and Balvenie Tuns 1401--We just can’t get over them. And our review of Batch #8 is coming soon.
Anyone who wants to get us a sample of Batch #1 so we can complete the set would have our undying gratitude. [Bill: And I’ll send you a ferret!]