Tasting notes:
The Tullamore Dew Celebratory Phoenix opens with crabapples on the nose, like a beloved mare burying its nose in a peachbark bucket of crabapples picked by a laughing Edna Krabappel. There’s a note of lavender or lilac perfume below the surface, like the time you discovered an older woman hiding beneath your bed. (The weird thing is that she never explained what she was doing there or how she got there in the first place.) She’d been eating apricot chutney glazing a ghee-butter graham cracker crusted raspberry butterscotch tart, and it made her breath—her nonexplanatory breath—smell delicious.

It’s tempting to write that on the mouth, it was like deeply kissing her, if say, the older woman hiding under your bed had been supersecret agent Helen Mirren, circa RED or maybe Tilda Swinton if she were playing an older woman. That is, if Helen Mirren/Tilda Swinton had washed her stewed prunes down with sour and tangy mulled spice mango juice. The mouth feel is thick—just on the right side of cloying, like a plugged-in electric blanket wrapped around a mixture of arrowroot and agar flakes in a commercial dryer.

The mouth races to the finish like a hare on a mission or a Mig fighter looking to engage or a Mir space station reaching terminal velocity as it falls to earth. There’s a mutant who’s not interesting enough to join the X-Men; his mutation is simply looking like and smelling a lot like a spearmint-y candy cane. Presumably he also tastes like one, but I’m not going there. There’s also a bitter note, like when you remember you could have bought 1000 shares of Apple stock at $10 each in the mid-90s. There’s a general atmosphere on the very long finish of slowly cranking a pencil sharpener, filling the air with microbursts of graphite dust, while your life-partner, dressed in a latex jumpsuit, grates lemon pith and burnt black walnut meat on a zinc-plated Microplane zester.

It might sound like I didn’t like it, but I loved it. On the scale of cities in Arizona that hosted the 2015 Superbowl–
The Tullamore D.E.W. Celebratory Phoenix is Phoenix, Arizona! [John and Stephen: Bill! The Superbowl was in Glendale, not Phoenix.]  Jeepers, you guys are sticklers! Glendale is less than 10 miles from Phoenix! Fine, rather than adjust my rating, I’m renaming the dram; it’s now The Tullamore D.E.W. Celebratory Glendale. Happy, you sticklers for detail? Well, since I walked away with the rest of the sample, I sure am!

–Our thanks to Gemma Cole and Tullamore D.E.W. for the sample! 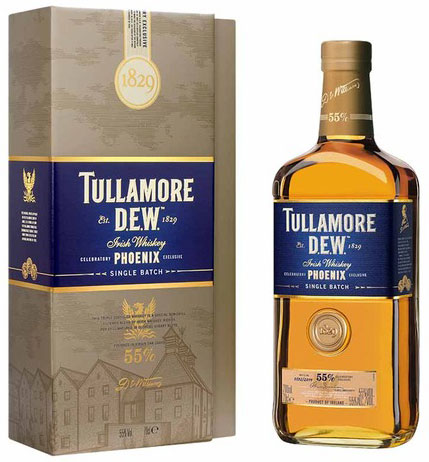