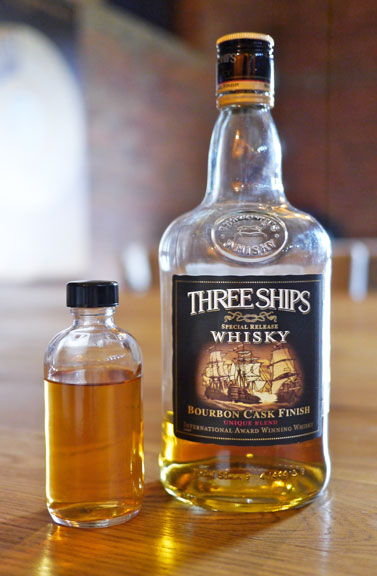 Tasting notes:
The nose comes on fully Bourbon-y at first, as one would expect, but then it feels like it’s falling apart. Or maybe we are (too many whiskies reviewed at one sitting is contraindicated). Then it rallies (or maybe we do) and it presents with a rich, deep vanilla note caught in a pound cake. That note then changes into grilled and smoked lemons. The nose undergoes one metamorphosis before our olfactory bulbs, then another.

The mouth is full: anise rubs elbows with smoking whitefish with lemon slices and a tiny bit of caramel. It’s spicy, but also sweet, like juice concentrate you’ve reduced into a demi-juice. Or a supersaturated concentrate that can only be constituted in a centrifuge. There are also hints of the lemon-scented cleaner the night crew uses to clean said centrifuge. The mouth is metamorphic, too–only unlike on the nose, here it starts to change us. We’ll be the Beetles, once we find our Ringo.

The finish is powerful, with a spicy kick that stays with you longer than a New Orleans étouffée. The sting stays with you like the memory–and the reality–of having been convinced by a wayward uncle that a chili pepper plucked fresh off the plant was an exotic fruit. The only difference is that living through the finish on this dram is so pleasant, you will find no reason to learn any hard lessons from it–other than where to find another bottle. Alas (for me), that’d be South Africa.

Rating:
On the scale of metamorphoses–
The Three Ships Bourbon Finish is Kafka’s–Few could’ve predicted that a novella about turning into an insect would become a classic of world literature, but the idea and the execution were both so top-notch, it ultimately transcended its protagonist’s lowly, later form.

–Our thanks to Andy Watts and Three Ships for the sample!