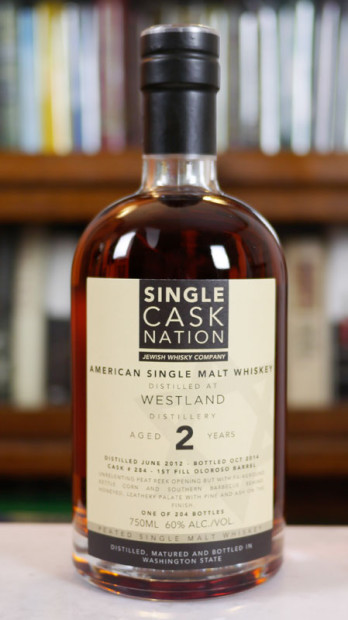 Tasting notes:
This whiskey has a ridiculously precocious balance for a 2 year old, probably on a par with what Gabby Douglas had at that age. There’s also weird and compelling smoke, like that coming out of a custom van filled with Marshall amps and bass players. The nose also presents one with the perfect amount of funk, for a white boy. The smoke and sherry play together like that snake and the rod in that oddly appropriate symbol for doctors. (Thy rod and thy snake, they comfort me. OK, not really.) Wasn’t it Rod of Asclepius who invented over-billing? Moving on…

On the mouth, it’s just impossible to tell it’s 2 years old. It’s the Benjamin Button of whiskeys: if it sat in the barrel two more years, it’d be terrible white dog not even fit for gasoline. Amazing. It’s black and red tea lying together in a way that makes cats and dogs uncomfortable. There are tannins on the mouth that are so well integrated, they sneak right past you at first, and then next thing you know, they’ve coated your tongue with a layer of sap from a bonsai tree. Delightful. The most amazing thing is that on the mouth, you’d never know it’s 60% abv (!). It’s smooth and unctuous and aggressive in all the right ways and places. Damn.

The finish is a mentholated, double-thick Listerine strip the kids are going to be using to do Darth Vader impressions without electronic help. Just wait: when The Force Awakens comes out, you’ll see what I mean. The finish is long and graceful, like a tracking shot of a buffalo herd migrating 1,000 miles at a 2/3 speed gallop. That may seem long and boring, but trust me, by the end, you will have moved and been moved.

Rating:
On the scale of jokes about touring funk bands–
The Single Cask Nation Westland 2 Year Old Peated Cask is I don’t do drugs any more…Any more than your average touring funk band–An instant classic by a clear genius. It’s going to be hard even for Patton Oswalt to top that one.