[We were fortunate enough to get John Glaser and the Compass Box Team to agree to an interview, which they responded to as a team (thus “CBT”). The rest of the team is Gregg Glass, Robin Robinson, Chris Maybin, Céline Tetu, and Jonathan Gibson. Unfortunately, we do not have professional pics of Jonathan Gibson, thanks to the “scrubbing” the NSA has yet to complete. We’re not quite sure what that means, either, but we know better than to ask any questions.] 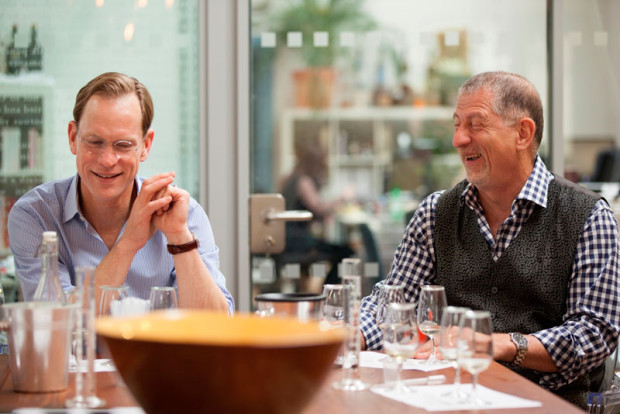 MI: If single malts are camels living in luxury condos in Dubai, what are blended whiskies? And how about vatted malts? Please limit yourself to one animal per answer.

CBT: You didn’t specify if the camel was a dromedary or a bactrian. For a Blended Scotch, we would prefer a bactrian, where you can slip comfortably in between the two humps for the long ride to Dubai, where we believe the condos offer double-wide parking spaces.

But aside from that, we think blended Scotch is like the best of the Camelidae family. What we strive for is retaining the character of our components, so we’re not going “camel crazy” on the whole Tylopoda sub-order; we’re using just a few from the right families, like luxurious alpaca or vicuna, so that they don’t get lost in the result.

That goes for the grain whiskies as well as the malts, we’re choosy about each barrel we select. Grain whiskies are sometimes looked at as the “dune buggies” of blending, just get the job done, gets you through the desert, don’t be fancy because they’re mostly just used as filler, something to mix with the malts. But we really like grain whiskies, we look for the breeding in each barrel. Like the Bactrian, lean back, easy to ride, shows its breeding and at the same time a wonderful trip to the oasis.

With blended malts (and we don’t want the SWA on our humps over the term “vatted”) it’s a similar approach, but now it’s all about the richness of the results and how well they work together. Carefully choosing the right textures, flavor profiles, using only 2 or 3 components, of which each brings their uniqueness. Think of a camel hair coat with a vicuna lining and alpaca collars. It’s not that each of them in its own right isn’t wonderful, but in the hands of a mindful tailor, you’d never want to take it off. Especially in Dubai. 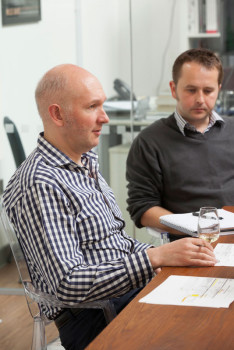 MI: Once, at dinner, John tried to explain the virtues of non-chill filtration to his children using glasses of buttermilk and the sleeve of his best linen shirt. They didn’t get it. What should he have said or done instead?

CBT: We heard “children” and “buttermilk” in the same sentence and that should have been a clue to where that was going to end up!

But he’s on the right track, it’s all about the natural oils, which are fats. Fats are one of the flavor delivery mechanisms detected by mammals; they’re necessary for survival, they’re primal and natural and they give us a feeling of contentment and satiety. So if you filter out the fats by chilling the whisky down first, you rob the result of its richness, mouthfeel and bursts of flavor naturally attendant in the liquid. It’s like liposuction, with no good effect. Don’t talk to the kids about liposuction, though, it’s completely icky and worse than buttermilk.

MI: We hear the Compass Box Lost Blend is an attempt to reprise or do something very similar to what you did with the Compass Box Eleuthera. What do you see as the difference between the two, other than the name? And did you change the name because people (and by “people,” we mean the three of us) initially thought “Eleuthera” was named after a particularly pesky planaria commonly caught in the Caribbean?

CBT: Well, what John caught in the Caribbean was the idea to start a whisky company, so, yes, it’s kind of a similar bug. He was vacationing on Eleuthera Island in the Bahamas when a large fish (it could have been a marlin but with tentacles) emerged from the ocean and spoke to him: “start a Scotch whisky company in London; do not put the word “glen” in the title; give one of the products an unpronounceable name, put a compass in a box…” It was weird, and he would have just blamed it on the sun and the Bordeaux in his glass, but suddenly he saw images of Andrew Usher, John Walker and Tommy Dewar (dressed in a kilt) in a dinghy off shore, luring the fish back into the ocean. That’s when he realized his destiny, right after his wife Amy woke him up.

Eleuthera was our first vatted malt (yes, we were allowed to call it that, then) and this is where it gets really weird, the marlin returned and cornered the market on the “fingerprint” malt in the recipe (turned out John wasn’t dreaming). So we made a fateful decision not to replace it but rather to discontinue the brand. It sort of became a “white unicorn” of whiskies and we were besieged with requests over the years of where to find it and to bring it back, and after 12 years, we finally “found” a limited amount of those whiskies. At the same time, we’d long been fans of O. Henry’s “Lost Blend” short story–while the action is of two men at a bar trying to create a magical elixir, the real story is about the bartender falling in love. Works on a few levels–complexity, mystery,romance, like we hope the whisky does. Except fish, there are no fish in Lost Blend. (Make sure you get that in!) But you can add unicorns, everyone likes unicorns and once Lost Blend is bought up, it’s off to Unicorn Land again.

MI: Your new Great King Street Glasgow Blend got its start in a pair of Great King Street “experiments.” We thought that they and the resulting Glasgow Blend yielded very positive results. So tell us, what happens to the whisky experiments that really fail? And what streets would they be named after? Perhaps the corner of Whyte St. & Mackay Avenue?

CBT: Does Richard Patterson know about this? We always thought of Great King Street as a line of whiskies, and early on we were thinking of contrasting styles sharing a similar mission: Edison and Tesla, Patton and Montgomery, Martha and The Vandellas, Abbott and Costello were models of what we were trying to achieve.

And there are no failures, just some we don’t like as much. To dispose of those, we return monthly to blending’s roots in Glasgow, where you’ll find such streets as Mungo and Dobbie, Wellington and Bath, Dorsett and Argyle. There we distribute them freely amongst American hipsters abroad looking for names for cafés to start back home.

MI: If you could revive one of your discontinued or “archive” whiskies, making it part of your Signature Range, which would it be and why?

CBT: That would probably be Eleuthera, but that ship has sailed.

MI: And can you give us any hint what new expressions you have on the way? (Come on, you gotta help us break some news here…)

CBT: When John was back in seminary school, he met a man who put forth the proposition that you could petition the Lord with prayer….Fourscore and seven years ago…oh, sorry, what was the question again? 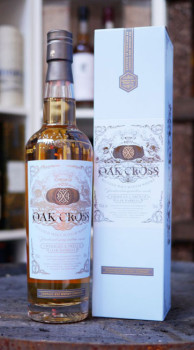 MI: We love Compass Box’s Oak Cross, and we love the idea of putting an oak cross on the inside of the head of the cask to add a little something something. Would you consider expanding the range to include other major religions, with expressions such as Olive Wood Star of David, Cypress ﷲ, Teak Khanda, or Rosewood Buddha?

CBT: If you recall, Oak Cross was the result of having violated a sort of religion when Spice Tree, using a “non-traditional” cask, was introduced. With all the religious strife in the world, and having already run that gauntlet, we prefer to take a more ecumenical approach. Rather than religions, we’ve been toying with the idea of a range of “Final Editions”, an elegy to newspapers around the world: The Daily Asyla; The Global Spice Tribune; Hedonism Herald; Oak Cross Courier; and Peat Monster Picayune. 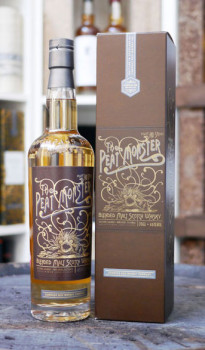 MI: Peat Monster is as good in a Penicillin as any whisky out there. Have you ever thought of teaming up with a pharmaceutical company to come up with your own particular brand of antibiotic cocktail? We’re thinking a CiproPeat or a ZithroMonster would play especially well with the drug dealer (pharmaceutical rep) set. Thoughts?

CBT: A great idea, but then we start thinking of the patent lawyers and trademark infringements and all those product marketing guys sending us emails at 3 in the morning with “ideas” and “concepts” featuring Venn diagrams and flow charts. Then the reps showing up at our door with bagels, expecting an order. We think we may just stick with whisky. 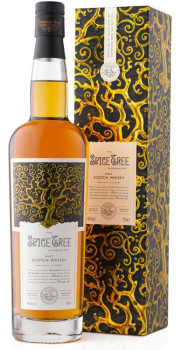 MI: The new branding of the Spice Tree has us ver-Klimt. But we wish you had Egon Schiele instead. Any thoughts on these terrible puns and the art behind them?

CBT: If we told you the design brief for the label was “imagine you’re sitting under a spice tree on acid” would you go for that? But we know the visual reference you’re alluding to and we think our designers would be flattered by the inference; we can’t speak for their inspiration, but safe to say, we think it’s far enough away that we can avoid calls from the Klimt estate or the Museum of Modern Art. Interestingly, we walked into a customer’s restaurant in Chicago and saw a wall sculpture that’s almost identical to the label and by contrast, we’re intensely flattered by other whisky companies that have used our techniques on their products. Schiele on the other hand, well, that would certainly have to be a “private bottling”.

MI: Finally, if you could blend a whisky called “The Malt Impostor,” what would you put in it? (Besides, of course, mustache greasepaint, tears of little children, and ferret pheromones.)

CBT: You’re asking us to capture the essence of the ethereal and give it form! We are craftsmen, not gods! But from our lowly mount, our humble attempt would be:

3 parts madness
1 part Ionesco
1 dash of Beckett
1 part the theme song to “StarTrek: Next Generation”
3 years in wood with The Professor from “Gilligan’s Island”