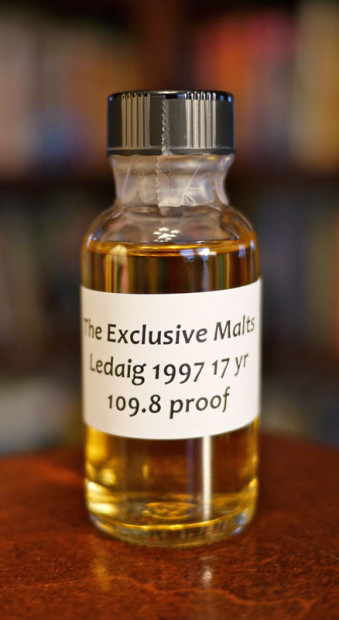 Tasting notes:
It smells like expired fruit that’s been expired for, like, ten years. So says my son. I told him that it was, in fact, 17 years old, not 10. And because he’s 11, I then told him that he must go to bed. Returning to the nose, I see that it has organized itself into a surprising tableau. A paraffin wax duckling with a rakish expression on its bill, pickled lemon rind cut into a möbius strip, a Horween watchstrap dipped in syrup. All of them pieces in a Chutes and Ladders game made with a fruit leather board. The first player leans over to roll the dice and exhales his pipe smoke, and thus an early morning fog suffuses the two-dimensional world.

The mouth is salty at first, then hot, then unctuous. Oils and lipids and lipids and oils. It’s like the wax paper holding together a mortadella sandwich after a long day on a hot beach. The paper shines and has the translucency of wet linen. The bread of the sandwich is soggy from the olive oil dressing and the fatty chunks in the mortadella. Mmm, I could eat this delicious MRE* anywhere. (*Malt Ready to Eat.)

The finish is still flinty after several minutes, but the pipe smoke and sweetness hang around as well like guests you really don’t want to leave. (Can I get you more coffee? You know, the roads are going to be icy tonight, won’t you stay?) It has the perseverance and durability of a waxed canvas jacket in a spring rain. What’s more, it has the mineral promise of renewal that comes with every rainy spring day.

Rating:
On the scale of songs about long finishes–
The Ledaig 17 Year Old 1997 from The Exclusive Malts is Baby It’s Cold Outside–This is a classic song. Though some would say, with my son, that it hasn’t aged well; and others might worry over the subtext of the song; I say balderdash and point to the approach that the film, Elf, takes. If the song has a creepy lyrical element amid the harmonic delights, just have an over-sized elf sing it while a woman is in the shower. Problem solved.
–John