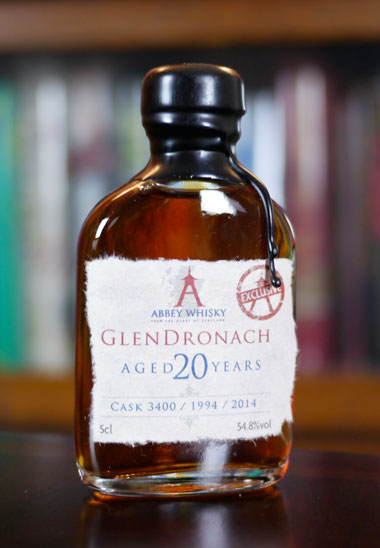 Tasting notes:
Holy crap! The Glendronach 20 Year Old Abbey Whisky Exclusive is darker than cough medicine, actually edging up on molasses or the Valdez oil spill. The color is tea left steeping by a 200-year old monk’s corpse, because he was nearly saintly, and it’s now a holy relic. It looks like a potion mixed out of rare herbs by a Wiccan combatting a would-be necromancer who not only read all of the published Game of Thrones books, but also started a fan-fiction website with X-rated White Walker/Wall Guardian homo-erotica. The Wiccan, naturally, deplores that, and my goodness, this is unbelievable. I’m not normally a lover of sherry-bombs (that would be Stephen), but this is the Sherry Apocalypse, Now! This the Sherry Götterdämmerung, the unheard Wagnerian opera of the Ring Cycle. This is Frodo flying an eagle straight to Mount Doom, throwing the One Ring into the lava, and flooding Middle Earth with sherry-effluvia and ejecta. I’ve literally—in the literal, not figurative meaning of the word “literally”—I’ve literally never smelled a whisky like this. There’s funky beef broth base in an eyeliner- (for Goths) infused French onion soup in a Ming Dynasty crock being dumped on halberd-holding Beefeaters. Good gravy! (Literally.)

On the mouth, this is Big Sherry II: Faster + Furiouser + Smokier + Ostrichier (and you don’t need any antibiotics to take care of that pesky Tokyo Drift!). It’s Dye Harder With a Vengeful Batiker! It’s like being in the fog of an Edgar Allan Poe tale and realizing, mercifully, that’s it’s only a pastiche produced by Arthur Conan Doyle before he turned to writing the adventures of Sherlock Holmes. It’s tannic-ly tea-like, if the aforementioned Wiccan blended roibos and Darjeeling teas to drink with “Essence of Fire” burnt pine-needle scones.

The finish goes on and on, like a dream within a dream with a dream within a dream within a dream. Imagine if Werner Herzog rebooted the Jurassic Park franchise standing in as a metaphor for the Tales of 1001 Nights. Imagine if the T-Rex were Aladdin, and Aladdin were the eternal emptiness of a soul screaming in the woods, surrounded by nothing but friendly lemurs. (Actually, I’m having a hard time imagining that myself!) Imagine instead prune pits that have passed through triceratops and that are matriculating in the remnants of hundreds of pounds of ferns offloaded by a celiac-afflicted mastadon. We also got lead-painted shotgun shell casings from an unsuccessful shotgun marriage in a church bedecked with jasmine-inflected bespoke molasses. Holy crap. These are uncharted lands—I…I…I…I…holy crap.

On the scale of astonishments–
The Glendronach 20 from Abbey Whisky is finding a new point on the Compass Rose–It’s not as prosaic as SSSE or ESSE, instead of SSE. It’s more like NSNS as if a spinning needle has pointed me towards something wholly new; a fifth or seventh dimension or even 29th dimension that my senses barely encompass and that the compass barely senses. It’s easy to be speechless, since I’m typing. This is unprecedented.


–Our thanks to Abbey Whisky for the sample!