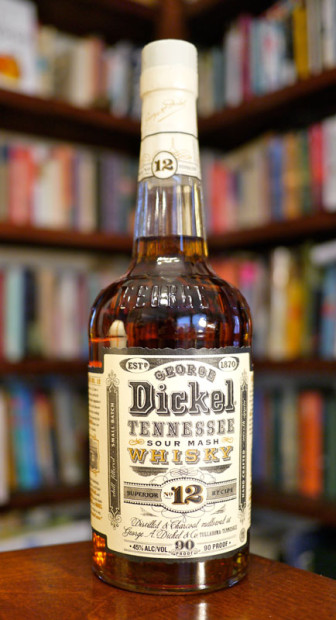 Tasting notes:
Occasionally we begin our reviews with a mention of the color of the whiskey, or the legs it produces in the glass.  But this review begins with mention of a sound.  That sound is the protracted glugging the bottle produces when turned for a proper pour.   For several seconds, and before a drop of spirit flows out, it’s all glug, glug glug, glug.  It’s almost like the bottle doesn’t want to let the whiskey go, and it’s only defense is an arresting sound.  And who can blame it?   The nose has the pumpernickel notes that Bill picked out in the No. 8, but I want to say it’s even more pumpelnickelier.  Perhaps it’s like pumpernickel pretzels left in the oven for a couple extra minutes.  I also get some rye notes, like thick slabs of bread toasted with warm soft butter spread on it.

The mouth continues with the hearty, grainy feast.  Pumpernickel Ak-Mak crackers in Turkish lunchboxes.  Finn Crisps as party favors at a Swedish birthday party.  Green peppercorns glistening and hissing as they are picked off the flank of a roasted squirrel.  Garbanzo bean paste used for “healthy” s’mores.  Finally, halved baby romaine, grilled, to round out the meal.

Pepperminty on the finish.  Like peppermint foot lotion deployed in a fraternity prank involving a snoring pledge.  Spearmint candy canes weaponized after a few seconds in a German pencil sharpener.  If these images give the impression of something jagged, please know that the warming, buoying payoff is about the unfold as you are kissed under the mistletoe in the crispness of the moon-bright night.

On the scale of things that unexpectedly produce arresting sounds as part of their defense–
The George Dickel No. 12 Sour Mash Tennessee Whisky is the desert rain frog–I will now write a few additional words without a concern for what they say, because that video is all that anyone is going to remember at this point.

–Our thanks to George Dickel Tennessee Whisky for the sample!